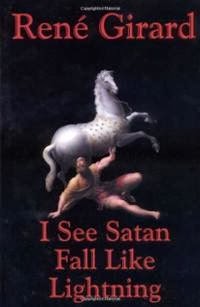 It happens sometimes. I have a question or am pondering some conundrum or other and the right book arrives at pretty much the right time. In a session with my supervisor a few months back Paul mentioned an article by Rene Girard, whom I had never heard of. I read the article and over the past month have read two of his books, The Scapegoat and this one. I have another couple sitting on my shelf and they have elbowed all others in my to be read pile out of the way and sit firmly on the top.

Girard has pulled a number of threads together for me: he has enabled me to rethink the atonement in a way which is consistent with an evolving Universe: he presents a view of scripture which is again consistent with what I know of science but is also faithful to the Bible as the Word of God; he has given me, for the first time in my life a theology (if that is the right word) of Satan which makes sense to me. Most importantly for me, he is consistent with my own lived experience of God's saving action in Jesus Christ.

Girard is primarily an anthropologist and a philosopher. He writes with that convoluted almost poetic style of the French academy but he is a quite accessible writer. In any event, there is, at the beginning of I See Satan Fall Like Lightning a succinct summary of his argument, so that no-one need get lost. His primary aim is to be understood.

The starting point for his work is the phenomenology of myths. He takes mythology very seriously and says that behind even the most fantastic of them there are actual events which have gone through a process of revision and retelling which follows an identifiable pattern. His elucidation of this in many instances is quite compelling. Behind every myth he says is a process of escalating mimetic competition, and isn't that a phrase to conjure with?.

Mimesis is the human instinct to learn through mimicking others. Our skills are picked up in this way, but so also are attitudes and thoughts. In particular we learn what is desirable by copying what others find desirable, particularly those we regard as our superiors. This mimetic learning is what makes us human and enables us to build a culture that outstrips that of any other animal known to us. Mimesis is thus a very commendable thing, but it does have a serious drawback. Even as it builds community, and instructs us in the requirements of our particular culture our mimetic desire brings us into conflict with others. This conflict escalates and would destroy the culture created by mimesis except for the fact that every culture has found a common way of dealing with the problem: the scapegoat mechanism. An individual is singled out - someone different in some way from others in the community who is identified as the cause of the problems caused by mimesis. This individual is then expelled - exiled or killed - thus allowing the community to be (temporarily) rid of its conflict. The expelled one thus becomes not only the cause of the conflict (from the community's perspective) but also the cause of its healing. The identity of the victim and the stories told concerning him/her then undergo a transition - the victim grows in magical power with every retelling,  and eventually is divided into two, a good and an evil character, and over a period of time the stories of the victim are bowdlerised and become the myths of the culture (although always retaining an identifiable trace of the original mimetic escalation and act of violence).

The process of mimetic escalation leading to victimisation Girard identifies with Satan, who does not possess Being, but is sort of a hyper projection - a parasite, he says, living on human consciousness.

This process is universal, claims Girard, and is countered in only one way: namely the life death and resurrection of Jesus. Jesus becomes the classic scapegoat - or more accurately, The Lamb of God. The innocent one becomes the focus of the escalating mimetic contagion of the various groups in first Century Palestine. His death allows them all to unite and find a harmony otherwise impossible. Jesus acts, in other words, in a way common to scapegoated victims in every culture and every grouping the world has known to date, but there is one important difference. Unlike other scapegoats, Jesus returns and thus begins the unwinding of the whole mechanism which has both built and enslaved humankind.

I have, of course, greatly simplified Girard's argument, and there are points on which I do not quite agree with Girard. I am not sure, for instance, that all desire is mimetic; some arises from those instincts and impulses hardwired into us by our evolutionary history. But generally I find his theory refreshing and convincing.

This is a shortish book, 200 pages or so including footnotes, and one I would recommend. It sits comfortably with my contemplative practice and has given me a new depth of understanding of and appreciation for the scripture and of Jesus

Alden said…
I have just re read Karen Armstrongs book 'A Short History of Myth' and Christopher Bryants ' Jung and the Christian Way' which deals a bit with Scapegoating so maybe this is a timely book for me also.
29 October 2013 at 09:06