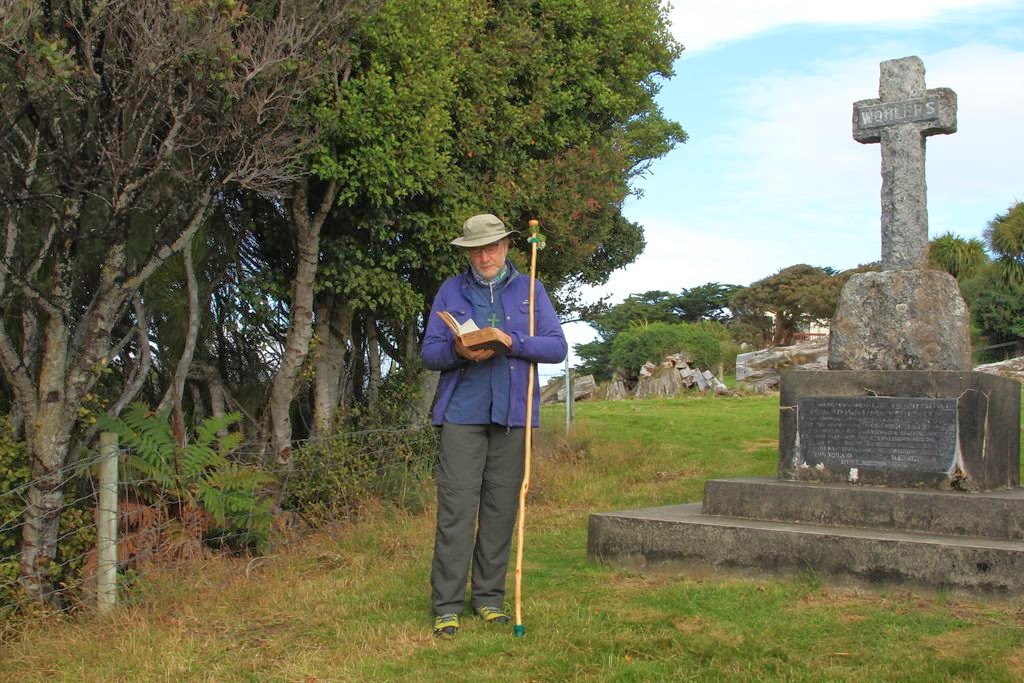 I woke early and ate a breakfast of homemade bread and hot cereal. The evening before, the conversation at St. Andrews Anglican Church had spilled over into a time of quite deep sharing with Bubba, Jo and Andy and the rapport built continued into the new day as we sat around the breakfast table. Conversation was interrupted by radio interviews, conducted by telephone as we ate, with Radio Live in Auckland and with a Maori station from Northland. Then we were driven to Wohler's Cross and the Hikoi began.

Stewart Island is a beautiful place and one of the most beautiful parts of it is the small hill above Half Moon Bay where descendants of the Rev'd Wohlers have built a memorial to this pioneering missionary. Below the bush clad hillside are several golden sand beaches with small rocky headlands and the sea is dotted with islands large and small. The memorial is a stone cross set in a small dell on the hilltop, with a view out to Ruapuke where the Wohlers' mission station used to be and down to the place on the beach where they are buried. We walked to the cross and stood in small groups talking as we waited for the right moment, in the way these events often happen. There were about 20 or 30 of us, I suppose, some from the mainland but most from the Island, including Wohler's great great granddaughter Nancy who lives permanently in this exquisite place.

When all seemed to be as it should be, Bubba welcomed us in Te Reo, speaking on behalf of the Tangata Whenua. He blessed the staff made for the occasion by Peter Tait and named it Te Harinui. Peter had carefully dressed a piece of manuka about 2 metres long. He fitted a small disk to the top in which is inlaid, in paua shell, a map of Stewart Island. He has decorated it minimally with nautical braidwork and, for the occasion, tied some tiny, highly fragrant Stewart Island orchids to the top. The perfume of the flowers drifted through the small dell during all the proceedings. I replied and spoke of the reasons we were walking; of the journies of Tamihana Te Rauparaha and Johan Wohlers and the reasons they made them; of the need for our people to be confident in their own experience of those same motivations. And then we began.

We walked perhaps 4 or 5 km back over the hills to St. Andrew's church where there was a large and delicious lunch and time for more conversation. Then a kilometre or two later, in a short, well crafted and deeply moving service, we  were blessed in the Oban Presbyterian Church before boarding the ferry for Bluff. On the wharf a Ngai Tahu woman whose work had prevented her from attending in the morning gathered us all together, said karakia and sang a waiata. The passage across Foveaux was mercifully uneventful except for the large numbers of albatrosses soaring around us as we left Stewart island.

In Bluff we were welcomed onto Te Rau Aroha marae, one of New Zealand's  best kept architectural secrets. The Wharenui is named Tahu Potiki after the great Ngai Tahu Tupuna and is, unusually, round, a tribute to the shape of the traditional housing of the local people. The interior is beautifully wrought with  carvings and tukutuku panels of the highest quality all of which are vibrantly, beautifully colourful. Around the interior walls of the house and in the centre are giant ancestor figures, all of whom are women. They tower above us and look down fiercely, each representing the matriarchal antecedent of a local family. Each is intricately painted and they are more naturalistic in style than those of other wharenui. Each contains a compartment in which the living descendents of the tupuna place photographs and records of the continuing family story, so in the house we are surrounded not so much by a dead past as a living present. There was a powhiri, and then, of course, another wonderful meal in a whare kai only marginally less splendid than the wharenui. After dinner I spoke of the presence of God in our lives and the way the Church can sometimes obscure our sense of this. I invited people to treasure those times when they have realised God's love in their own lives. I was grateful that this truly remarkable place had blessed our journey by enfolding us at its beginning.

We left early enough for the three of us to sit around with our host Steve Mitchell, share some of his excellent home brew and debrief this extraordinary day. Te Harinui, the Hikoi of Joyful news has had the most perfect first day that I could have wished for. I look forward to the 29 to come.