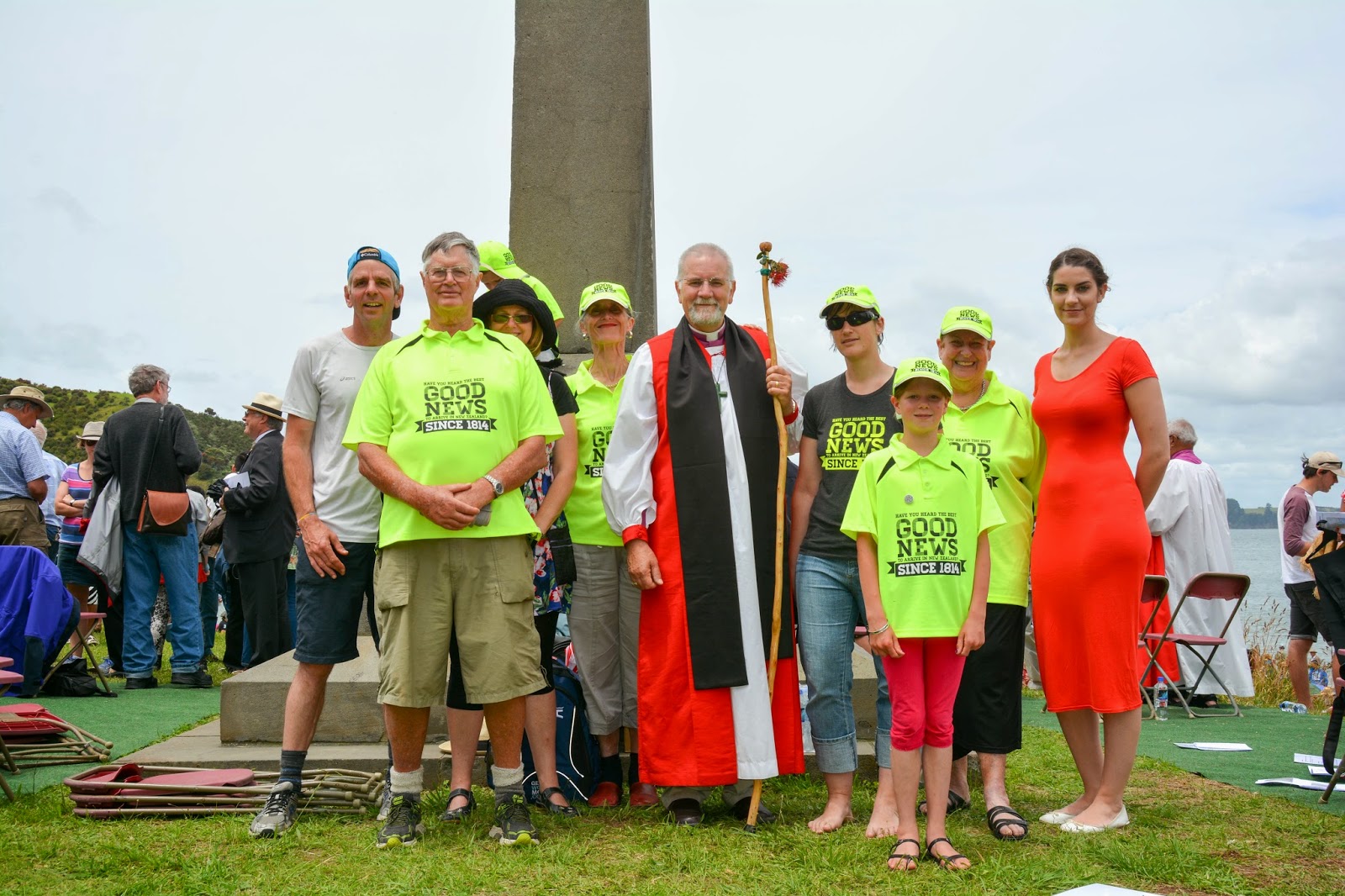 Called South contingent at Oihi, Christmas day. Nothing if not colourful.
On Christmas day our family goes to church. Then we retire home for a lunch of everybody's favourites; a sort of Middle Eastern, Mediterranean, Kiwi antipasto. Then we open presents before cooking an evening Christmas Dinner. So the routine today went exactly according to schedule except the context was a little unusual.

To go to church we returned to Oihi, travelling across the hills of Northland to arrive around 10 for the 11 am service. We walked down the now familiar path to join the few hundred people who had already gathered. The forecast for the day was rain but the day was mercifully overcast and dry. Behind us a long queue of people walked in a snaking line down the hillside, carrying camp chairs and umbrellas and picnics in bags and boxes and baskets. I joined the other bishops, changed into the convocation robes which had been lent to me by Ross Bay (Mine being the one thing I had forgotten to pack when I left Dunedin)and waited for worship to begin. In the water 20 or so small craft sat at anchor with one or two still arriving.

The service was broadcast on TV One, so timing was exact. On the dot of 11:00 Te Kitohi Pikaahu and Ross Bay welcomed the crowd, by now about 2000 or so strong, in Maori and English. Then followed a simple but powerful service. There were readings from Marsden's journals describing the original event of 200 years ago. The Bible passages  used by Marsden were read and Philip Richardson preached a very good sermon. Samuel Marsden, the great - great - great - eponymous grandson of the original missionary, addressed us briefly. We prayed and sang Christmas carols. I've never much liked the New Zealand carol, Te Harinui (not least for the fact that when most people sing it they mispronounce harinui [great rejoicing] as haranui [great blasphemy]) but today to be singing of the bay and the grassy ground and the summers day as we stood in the very bay, on the very grassy ground on a summer's day, albeit a different one, was quite moving. We finished exactly on schedule at 12:30, a pretty remarkable achievement on behalf of the planners and Jayson Rhodes who was producing.

I was so glad to be there. The hillside was filled with people, most of them Christian of various denominations but a few were not. There were flags flying: tino rangatiratanga, the Yorkshire flag flown by the large contingent of the Marsden family who were there, and, oddly, the Israeli flag. And in it all Jesus was proclaimed.  The mood was gentle, positive, glad, friendly, as you might expect from people who had all travelled to be there, some a very long way indeed, and who were looking forward to the service and a picnic on the grass and maybe a swim in the bay. But there was something else as well.

Everyone at Oihi bay this morning was a pilgrim. All had sacrificed to be there. All had made a difficult journey of some sort. And there was a strong sense of the enormity, of the importance of the occasion. I felt like we were on holy ground. Holy places are sometimes chosen because they are naturally numinous. They are places where the curtain between this world and eternity is somehow thinner than elsewhere. Sometimes though, holy places become holy because they are the sites of repeated hopes and prayers and expectations of many people. Oihi Bay is a spot originally chosen as the site for the first mission for political and practical reasons. But now its significance to the social and spiritual history of our nation is increasingly causing it to be a place of pilgrimage and thus to be the goal of hopeful and prayerful journeys. It is rapidly becoming a very holy place indeed. For me it is an evocative, welcoming, challenging, healing place that sits alongside other more popular sites - Waitangi, Turangawaewae, our cathedrals, for example -and, though long forgotten,  perhaps now is beginning to surpass them.

We didn't stay for a picnic. Clemency, Catherine and I walked up the track to our car. We drove back to Waitangi for hummus and pickles and olives and cheese and delicious bread. We opened presents from each other. We skyped our family. We cooked Christmas dinner, pretty darned successfully if I may say so myself, in the caravan stove. We walked a kilometer or two along the golden sand beach under the pohutakawa trees then watched an episode of Outlander. A Christmas day just like any other, and yet, totally unlike any we had ever experienced before.

January 01, 2021
The evidence is there and it's not good. Most people break their New Year's resolutions. On average, people hold out 'til January 19, apparently although about 8% of people manage to abide by their self imposed strictures for a year or more.  We make New Year's resolutions because there's bits of us we don't like and because we fall for one of the most common misperceptions that people  have about themselves: that our failings are just a matter of  will power and that if only we had a bit of discipline we could all smarten our individual and corporate  acts up. Bah humbug, I say.  There's a French saying,  tout comprendre c'est tout pardonner . To understand all is to forgive all. This is profoundly true. Pretty much everything we do, we do for a reason. What trips us up is that a) our reasoning is faulty,  based as it is on inaccurate premises and incomplete information and b) our reasoning is usually completely invisible to us. So we notice that we
2 comments
Read more