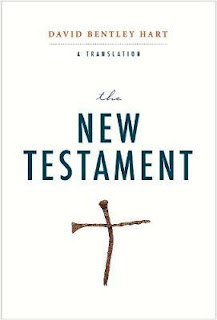 Last week I received my copy of David Bentley Hart's translation of the New Testament. The first of his books that I ever read was Atheist Delusions, which I found so entertaining and helpful, that in fairly short order I bought and read The Beauty of the Infinite, In the Aftermath and The Doors of the Sea. For a while now I have been reading The Experience of God. Hart is not always easy to read, not because he writes badly, but because he writes well. His arguments are strong, clear, concisely and cogently reasoned but are often complex. He is enormously erudite and has a bigger vocabulary than anyone I have read for a long time.  Other writers, of course, know lots of big words, especially academics, who speak to each other in that siloed, obtuse, opaque  dialect particular to universities, but David Bentley Hart, while not lacking in academic street cred, isn't like that. When I read his books I always have a dictionary to hand, as about every second page there will be a word I  don't remember encountering before, and which will invariably have been used because it is precisely, exquisitely, accurately appropriate.

He is quite polemical. His arguments are robust and he exhibits little patience with those whose arguments are not so. I'm always glad when he's on my side.

When I read, last year sometime, that he was publishing a translation of the New Testament, I immediately pre-ordered one, and that was what was inside the latest brown box from Amazon. It's a plain, and elegant book, 577 pages on good quality paper, and nicely bound. It contains a 35 page introduction in which he explains his philosophy of translation and a Concluding Scientific Postscript of 44 pages in which he gives some detail about why he has chosen some particular ways of rendering specific passages. These 79 pages alone are worth the price of the book.

He has made a point of trying to render, in English, something of the style of the Greek. The New Testament is a collection of occasional documents written by people who were not professional writers or scholars. Their Greek ranges from barbarous to mediocre, but what it lacks in style it makes up for in the immediacy and richness of the experience which underlies it. The translations we have to date all, for the sake of clarity and decency,  tidy up the grammar and lose much of the freshness and power of the original. Nearly every translation has been produced by a committee in a process which tends to "flatten" the text by avoiding controversial or adventurous renderings. Nearly every translation committee, further, has translated from the standpoint of a particular theology and has, in places, obscured the meaning of the text in order to promote what they see as the "true" meaning of the text. Hart is particularly scathing about the NIV and the TEV in this regard.

My Greek is patchy but I can read the Greek New Testament  well enough to appreciate what Hart is saying, and well enough to appreciate what a masterful job he has done of accurately capturing the essence of the text. He has consciously avoided putting his own style into his translation, except in one area. He can't escape his erudition, and although he does a great job of mimicking the loose grammar of the writers, he can't bring himself to emulate their limited palate of words. His vocabulary is varied and inventive, but always, on investigation, precisely accurate.

Early in the piece, for example, reading Matthew 6, his translation of vs 2 is when you give alms, therefore,do not trumpet it aloud before you, as those who are playacting do in the synagogues...
I thought that in the word playacting he was indulging in a little Eugene Peterson style paraphrasing, but I looked it up, and sure enough, ὑποκριταὶ (hypokritai) means "actors". David Bentley Hart was being, as usual, absolutely precise and accurate. And this passage which I have read countless times, in Greek and in English, took on new life. "Hypocrite" is a vague sort of word. It's application is usually a matter of opinion, and often owes much to misunderstanding of people's motives and circumstance. But playacting! That's deliberate, and knowing and precise. I immediately had a picture of myself as a young Christian, walking to church with my Christian flatmates. I remembered that as we neared the hall where our Pentecostal assembly met, the number of praise the lords and hallelujah brother!s in the conversation increased, until by the time we reached the place we were so holy we were walking eight inches above the ground. Playacting. And how we did that, because (as I now realise) all the other 996 people in the hall were also playacting, and together we were all writing the script for each other to follow. I thought of countless Anglican services, not so much playacting, really, as a scripted rehearsal. The New Testament, when it is read as accurately as we can get it, has the power to subvert the most dearly held illusions we hold about ourselves.

I suspect, that also true to form, Hart 's intentions are at least in part polemical. Rather than arguing, he is presenting the New Testament as accurately and as clearly as his vast knowledge permits, and allowing it to demolish those fanciful theological structures we have built on it. Many of our most cherished doctrines, be assured, won't stand too much close contact with the unadorned New Testament text. This is a wonderful book. Be warned.

Jonathan said…
Some time ago I bought a copy of "Jesus and the Forgotten City" (Sepphoris) which substantially altered my view of Jesus' growing-up context. Nazareth might have been a backwater, but well under a half day walk to a rather cosmopolitan city complete with theatre. So, plenty of hypokritai (in the positive sense of the word) to be seen! Jonathan.
27 October 2017 at 07:57

January 01, 2021
The evidence is there and it's not good. Most people break their New Year's resolutions. On average, people hold out 'til January 19, apparently although about 8% of people manage to abide by their self imposed strictures for a year or more.  We make New Year's resolutions because there's bits of us we don't like and because we fall for one of the most common misperceptions that people  have about themselves: that our failings are just a matter of  will power and that if only we had a bit of discipline we could all smarten our individual and corporate  acts up. Bah humbug, I say.  There's a French saying,  tout comprendre c'est tout pardonner . To understand all is to forgive all. This is profoundly true. Pretty much everything we do, we do for a reason. What trips us up is that a) our reasoning is faulty,  based as it is on inaccurate premises and incomplete information and b) our reasoning is usually completely invisible to us. So we notice that we
2 comments
Read more