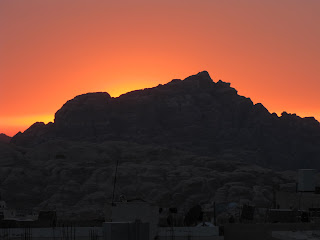 We drove a long way yesterday through the gray gritty Jordanian countryside. Every so often there would be a small business like town with its collection of shops and mosques, a bazaar and a church, and people for whom we were objects of mild curiosity. Near the towns were sometimes ragged Bedouin encampments: tents of brown camel hair or orange plastic; sheep; a few cows; camels; children; a mess of plastic litter. There was mile after mile of gently rolling hills, some of it well tended cropland baking in the post harvest sun, some of it bare gray desert.

At one stage we crested the brow of a hill and the Wadi Mujib opened out before us, about 1300 metres deep, a small version of the Grand Canyon. There was a slow winding descent and a winding slow slimb through its grandeur. We stopped at Madaba to see the ancient mosaic map on the floor of St George's (what else?) Orthodox church. We had a look at the magnificent Crusader castle at Kerak and arrived here, at Wadi Mussa (the Spring of Moses) around 5 pm.

We checked into our smallish but comfortable Arabian hotel, took a dip in the pool, and gathered on the roof terrace at 7pm for dinner. Us Europeans, dining as we do at the quaint time of 7 or 8 are bound to get a good table because we beat the Arabs to the smorgasboard by at least an hour. People here breakfast around 7, lunch - the main meal of the day- about 2 and dine about 9. Work and sleep fill the hours between.

Evenings are conducted in a very civilised fashion. Men gather for conversation (personal, and maybe some business), and perhaps to share a shisha and a cool drink between the office and home. Then around 9 the family gathers: men women and astonishingly well behaved children. All sit together as a nuclear unit or with friends or members of an extended family. The meal follows a well rehearsed pattern. First is salad, falafel, hummous, fresh flat bread, spices. Then meat dishes, usually lamb or beef but never, obviously, pork. Then there are sweets which are to European expectations mild and understated, usually centred on large plates of sliced melon, with jellies perhaps honey cake and a bland but refreshing junket. If someone told me I would have to eat Arabian cuisine every day for the rest of my life I would heartily thank them.

Then, after dinner, there is thick sweet coffee and shisha. Shisha is the traditional water pipe, shared by all adult members of the party, with smoke enjoyed for its flavour and aroma rather than for the buzz of nicotine, which it lacks anyway. Shisha is blended to give various flavours: apple, lemon, mint and so forth and in a culture with strong injunctions against alcohol, fills the same niche as wine in European cuisine.

So we sit. The familes begin to gather around us just as we finish and they are far too polite to stare. The waiters are attentive and the sun begins to sink behind the mountains of Petra to the West. Our food has been, as usual, delicious, and our pipe tonight is lemon and mint, which is regarded as more of a men's flavour than one for women; in any case Bridget doesn't like it as much as usual. As the sun sinks, the call to prayer sounds from the nearby mosque and is taken up by the other 4 mosques in town. Echoing, intertwining across what seems like a vast space in the twilight, there is a haunting, eerily beautiful challenge which no one in town can ignore:

The families pause their conversations. Within the hour the devout among them will respond but for now there are the gifts of God to share: fine food and shisha and shared words and each other

Merv said…
... talk about stream of consciousness.
You've been travelling The King's Highway (I know - nothing to do with Elvis) but "for reasons I cannot explain, there's some part of me wants to see Graceland" (Paul Simon - Graceland).
Make that Jordan
15 July 2010 at 20:23

Denis Bartley said…
David Fanshawe's African Sanctus music CD second track entitled Kyrie links The Call to Prayer with a choral setting of Kyrie. Your blog and especially your English translation of the call to prayer brought back vivid memories of our time in the Middle East. Blessings on your travels.
19 July 2010 at 09:17