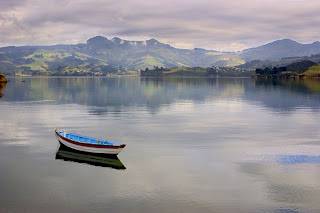 Get up early and sit in an uncomfortable position in the dark for a long time and do nothing? You're kidding, right?

It's hard to explain why anybody would want to meditate. For  a long time I didn't want to myself,  and then for an equally long time I did but couldn't gather up the requisite willpower to make a regular thing of it. But now there's been a corner turned and the quiet spaces in the day are my favourite bits of it. Partly, it's a cognitive thing. My life has been dominated by an insatiable quest to understand and lately there's been a sort of nagging inner certainty that the path to understanding somehow lies through this period of enforced inner silence. There's also Ian Gawler, who seems to think that meditation is as important, more important even, than any other lifestyle change you might want to make if you are intent on pursuing healing, and I have been quite predisposed to listen to him of late. And then there's lots of frazzled people out there for whom a little bit of completely stress free time in the day seems like a pretty good sort of idea and I can see their point. But wait.... there's more.
Think of the last time you drove somewhere. No doubt you made the journey with very little thought, if any, about the actual process of driving. We drive, and simultaneously converse, or talk on our cell phones, or listen to lectures on the CD player, or take careful note of the real estate for sale along the road and all the while our brain is performing all the complex operations associated with driving completely automatically and unconsciously. Now think about how much you knew when you were new born and what you know now. You have learned countless things, and perform them so unconsciously that some tasks - walking, controlling your bowels, talking, standing upright for example - you have forgotten that they are learned and that there was a time when you didn't know how to do them. You run through your day performing thousands of different operations unconsciously. Which is wonderful, but it does mean that the way you learned to do something  sticks fast, and is not accessible to change. Try changing the accent with which you speak, for example, let alone the language.
These automatic patterns are not just to do with physical activities. They also dominate the way we think, the emotions we feel, the way we relate to other people, and the very way we perceive the world. Our whole sense of self is a collection of these automatic patterns: patterns so automatic and so unconscious we don't even know that most of them are there. Most of our physical, emotional, intellectual, and cognitive lives are lived unconsciously, on autopilot. Despite our illusion to the contrary, we are not in control of much of it at all. Anthony De Mello says,
Most people, even though they don't know it, are asleep.They're born asleep, they live asleep, they marry in their sleep, they breed children their sleep, they die in their sleep, without ever waking up.
Meditation is about waking up. It is about escaping from the clutches of the automatic patterns: patterns of our bodies, of our minds and of our spirits. It is about being aware: of the world around us that is normally seen through the lens of our habitual patterns and being aware of ourselves, including the bits our patterns have long since numbed out and kept well away from our conscious minds.The patterns are very resilient and hard to escape.  They are shy of awareness and like to scurry for cover at the first opportunity.The sense of self that is made up of the sum of all those patterns is also very resistant to being sidelined and protests about it. This is why this little thing: simply doing nothing, is such a tricky thing to acheive. But when you do manage it, there is the momentary inner reward of knowing that you are awake (momentary because immediately the old patterns kick in: Hey! I've done it! and you're thinking again and immediately back where you started from.)
Meditation has its physical rewards. Fairly robust testing shows that ,performed regularly, it lowers stress levels, increases immune functioning and has a positive effect on pretty much any bodily system you care to name. I find that after meditating I am more focused and efficient, my relationships seem to run more smoothly and I have a much improved inner sense of equilibrium. But in a way these are secondary. It is the short but increasing periods of the day when the old patterns are shelved that is the real reason I do this. It is the realisation that the sense of deepened reality that comes with the shelving is starting to very very slowly leach out into the rest of my life.
So that's why. And once that question fades from people's faces, there's another one waiting, especially if they are Christian: is meditation a form a prayer and should Christians be doing it? The short answer is well...maybe and yes. The long answer will take a bit of time and I'll get onto it in the next day or so.

A 3 day taught retreat in the practice of Centering Prayer.   Saturday October 2 2021 - Monday October 4 2021 Centering Prayer is a form of Christian silent contemplative prayer. This retreat is suitable for beginners in silent prayer, or for more experienced practitioners wishing to refresh their practice.  The retreat will be held in the En Hakkore retreat centre in the hills above Waipiata in the Maniototo. There will be daily sessions of silent prayer, instruction and discussion. The venue is spacious and set in an expansive landscape. there will be some time for personal reflection.  The cost is $175 per person which includes 2 nights accommodation and all meals.   Since the beginning, following the example of Jesus, there has been a tradition of silent prayer in the Christian Church. Over the centuries this tradition faded from the popular view and became confined to monasteries. It was kept alive by a largely ignored, but never fading lineage of Christian contemplatives.
Post a Comment
Read more

David Whyte speaks in his audio series What To Remember When Waking of the myth of the Tuatha De Danann. They were a mythical race from Ireland's past who were tall, magical, mystical people devoted to beauty and artistry. When another more brutal people, the Milesians invaded Ireland the Tuatha De Danann fought them off in two battles, but were faced with a third, decisive battle against overwhelming odds. So, lined up in battle formation and facing almost certain defeat, the Tuatha De Danann turned sideways into the light and disappeared. Whyte's retelling is, to put it mildly, a gloss, but I am quite taken with the phrase and with the phenomenon it describes. Turning sideways into the light is the realisation that there are some encounters that are damaging to all involved in them: no one wins a war. Faced with such an exchange, to turn sideways into the light is to seek another, more whole form of relationship. It is to reject the ground rules of the conversation as they
2 comments
Read more

In the hills up behind Ranfurly there used to be a town, Hamilton, which at one stage was home to 5,000 people. All that remains of it now is a graveyard, fenced off and baking in the lonely brown hills. Near it, in the 1930s a large Sanitorium was built for the treatment of tuberculosis and other respiratory ailments. It was a substantial complex of buildings with wards, a nurses hostel, impressive houses for the manager and superintendent and all the utility buildings needed for such a large operation. The treatment offered consisted of isolation, views and weather. Patients were exposed to the air, the tons of it which whistled past, often at great speed, the warmth of the sun and the cold. They were housed in small cubicles opening onto huge glassed verandas where they cooked in the summer and froze in the winter and often, what with the wholesome food and the exercise, got better. When advances in antibiotics rendered the Sanitorium obsolete it was turned into a Borstal and the
3 comments
Read more

This poem captures it perfectly Camino. The way forward, the way between things, the way already walked before you, the path disappearing and re-appearing even as the ground gave way beneath you, the grief apparent only in the moment of forgetting, then the river, the mountain, the lifting song of the Sky Lark inviting you over the rain filled pass when your legs had given up, and after, it would be dusk and the half-lit villages in evening light; other people's homes glimpsed through lighted windows and inside, other people's lives; your own home you had left crowding your memory as you looked to see a child playing or a mother moving from one side of a room to another, your eyes wet with the keen cold wind of Navarre. But your loss brought you here to walk under one name and one name only, and to find the guise under which all loss can live; remember you were given that name every day along the way, remember you were greeted as such, and you neede
Post a Comment
Read more

This photo was taken by my daughter Catherine, when I was about 50. I think she did a pretty good job.  The number 70 has a kind of Biblical gravitas. It’s the number of elders appointed by Moses to lead the recalcitrant Israelites, and the number of people who went down to join Joseph, in Egypt. Jesus sent 70 disciples out to minister in his name, and the first Jewish Sanhedrin had 70 blokes in it. And, of course, there is Psalm 90:10:  “ The days of our life are threescore years and ten, and if by reason of strength they be fourscore, yet is their strength labour and sorrow, for it is soon cut off and we fly away ”. All this has some personal import because I turn 70 today, and can no longer fool myself that I am middle aged. I’m old. And before you feed me one of the lines of balderdash that pass for wisdom in our culture - “you’re only as old as you feel”; “70 is the new 50”; “age is just a number” or some other such nonsense, let me tell you that I am happy to be old. Deliriously
3 comments
Read more