What Are You Doing Here? 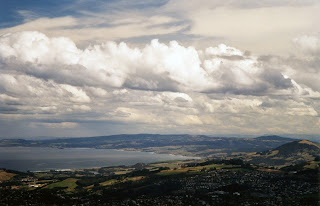 It was snowing on the Kilmog when I drove North last Monday, but by the time I reached Oamaru the sky was clearing and the temperatures were rising. By the time I got to Wainui on Banks Peninsula it was a clear, settled summer's afternoon. Pathetic communion. That's the fancy name for the literary device whereby weather and other environmental conditions reflect the emotional import of the narrative. Which is a long winded way of saying that much and all as I love my diocese, it has been, what with one thing and another, quite a busy time of late and it was good to get out for a few days.I went North to lead a clergy conference for the Diocese of Christchurch, so I was not really on holiday or retreat or anything like that, but I drove home late on Thursday feeling unexpectedly refreshed.

The issues facing Christchurch are immense. Much of their physical infrastructure is badly damaged or totally AWOL. People are tired after a long period of living in a world which will not stop moving. Populations have shifted and so have the congregations of some churches. There are ongoing contests of will with insurance companies and local bodies and The Press and people who think that Christchurch cannot possibly be Christchurch unless there is a big gray building with a pointy roof smack in the middle of it. The issues that we in Dunedin face - unsafe buildings, depopulation, insurance, funding, scarce resources - are not dissimilar, so the Christchurch Clergy Conference wasn't an escape. What was so energising and encouraging was gaining the perspective, even for a brief time, of another group; one which is innovative and focused and well led. There are a lot of people I know working over our Northern border, and it was fun catching up with them. It was more fun seeing how the ethos of my old home has changed.

Christchurch Diocese, for as long as I have known it has been divided along the factional lines common in the Anglican Church: evangelical v catholic, high church v low, liberal v orthodox, all that stuff. Now, after the earthquakes, a lot of that has gone, put into its proper perspective by the larger issues people face together. Sure, people are showing the effects of many months of overwork, but they seemed to me to be very kind to one another, mutually respectful and forbearing. And there is real excitement amongst many of those I spoke to about the possibilities opening up as old ways of being Church are necessarily abandoned and new ones are mooted.

I spoke about wilderness; about  Moses and David and Elijah and Jesus as they navigated that essential period of relinquishment between what was and what is to come. Thinking of ways to engage groups of people with the stories of scripture is the best way I know to deepen my own engagement with them; so for three days I was confronted again by the movement of the ancestors through the deserts of Judah and the peculiar spiritual power unleashed for us by those stories. Particularly, the story of Elijah in the cave on Mt Horeb moved me as it had never done before, and even more particularly the question asked of Elijah by the Spirit: "What are you doing here, Elijah?"

Elijah sat, lonely and depressed and suicidal at the mouth of the cave after his grand scheme to out-baal the prophets of Ba'al had exploded in his face. All of Elijah's history, all of his shortcomings, all of his giftings and failings, all of his mixed motives were gently presented to him in that question. As mine were to me. After that question came the utter silence as a vehicle for God's presence and as a sign of how things would work from this point onward. God led Elijah out and onward, not into any more public bragging contests, but into the ways of the Spirit whose modus operandi is shown most powerfully in the one who did not cling to his greatness but, rather,  poured himself out; the one whose invitation is to follow him on that path.

Peter Carrell said…
I had to slip away, +Kelvin, before being able to say thank you and good-bye (au revoir, that is). Anyway, thank you! The refreshing went the other way too, to listeners such as myself.
4 May 2012 at 16:54