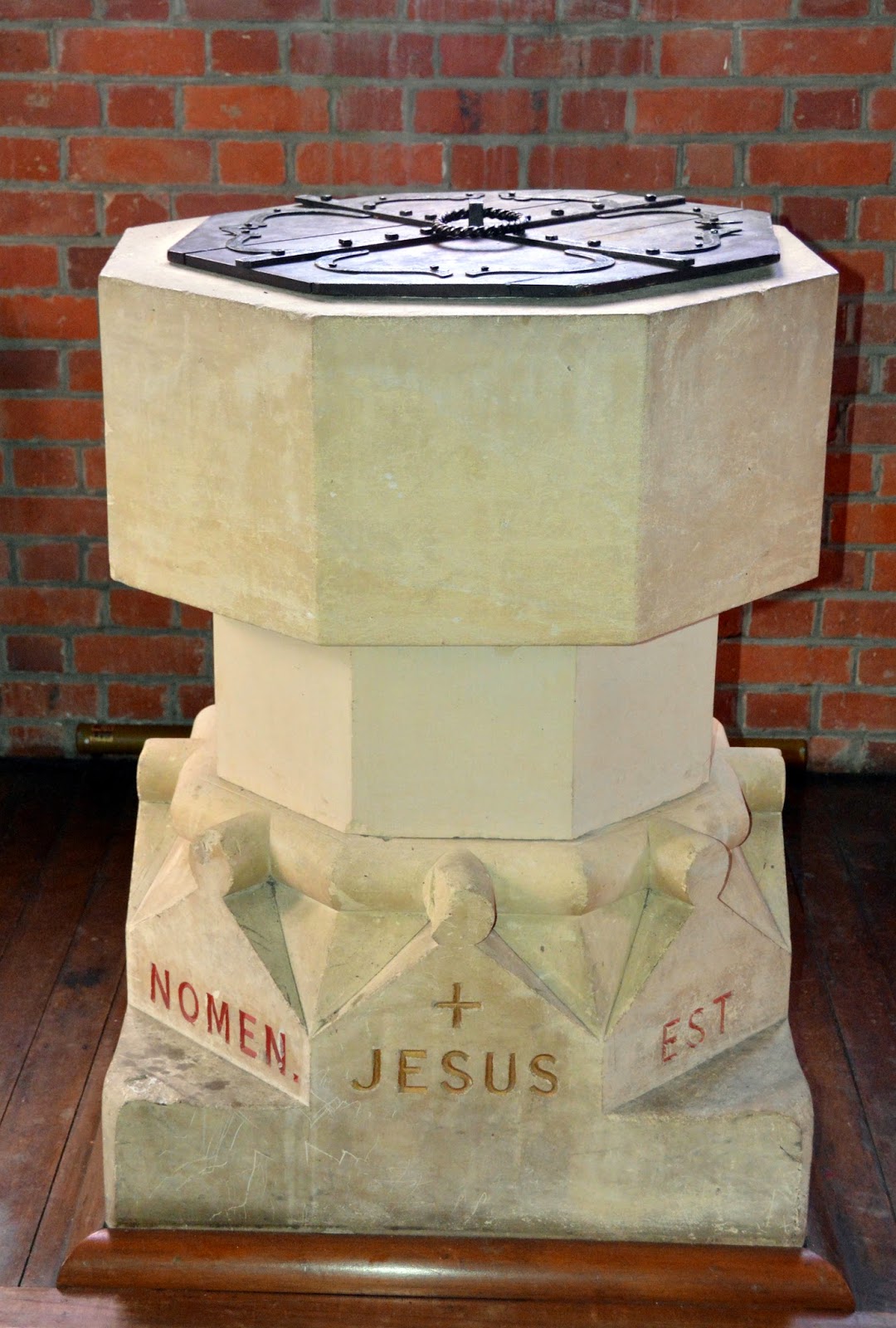 Recently I deconsecrated the church of the Holy Trinity in Lawrence. This small brick church is very pretty and contains some remarkable objects. A small pipe organ for example, and a beautiful brass altar cross given by the second bishop of Dunedin, Isaac Richards, in memory of his two sons killed in the first world war. But most interesting is the font.

This is a plain piece of worked limestone about a metre high. Around the base is an inscription in Latin, the translation of which is "Jesus is the name which is above all names". It has a wooden lid and the bowl is lined with a light metal, perhaps zinc. It is quite unremarkable except for one thing: its age. This font is about a thousand years old. It is Norman, and would have been made in England or France at about the time of the  conquest in 1066, when the new regime in England had a flurry of church building as part of their colonising strategy. The bowl and base are made from Caen stone, a French limestone in common use in England at the time, but the central column is of something else: my guess, local Otago limestone. It is all in very good condition indeed,  considering how old it is.

This wonderful object sat in the doorway of  a parish church and was used, for about 600 years to baptise goodness knows how many hundreds or thousands of infants: the children of serfs, freemen, squires and knights and merchants and priests and nobles and townspeople. Then at the reformation it was thrown into a field in one of those acts of vandalistic piety for which the reformers were infamous. At the restoration a new font was installed in the church and the old one was brought inside where it languished in the crypt for another 200 years or so until it was bought by Bishop Samuel Tarrant Neville who intended it for Dunedin Cathedral. It was shipped across the globe but when the new cathedral was built in the early 1920s the little Norman font was not deemed to be big enough or fancy enough, so a newer bigger brighter better one was donated by the old girls of St. Hilda's school, and the English one found a home in Holy Trinity Lawrence. Now with the closure of the Lawrence church the font is again homeless.

It is only a piece of limestone, but it is also a symbol of rebirth and new beginnings. It has survived through much of the history of the Anglican Communion, and now it waits to find out how it will carry that history forward. I'm not sure quite what to do with it, though a couple of suggestions have been made to me. But it seems to me that this is a symbol of our diocese; of the faith we have inherited and which is needing a new home and a new expression. We will talk together about what we are to do with the Norman font and our discussion and our final decision will have, I am sure,  a powerful catalytic and symbolic depth.

Alden Smith said…
What an interesting, intriguing and somewhat wonderful little story .... and what interesting stories this holy font could tell if it was able to speak. Surely somewhere new or interim can be found for such an important part of Church history?
31 January 2015 at 21:55

Father Ron Smith said…
Lovely article, Bishop. Considering its antiquity and its spiritual provenance; could it not be installed in the cathedral and used for very small children? It deserves, at least, to be seen as a precious artifact.
1 February 2015 at 09:28

Its an amazing article indeed.

You deserve a lots of respect from my side to publish this article for people who love to read spiritual things like this.