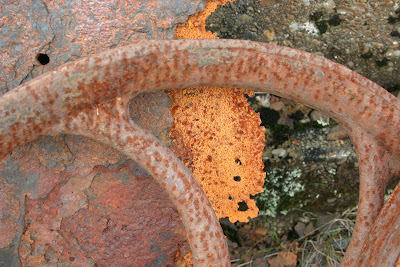 Some people have nasty jobs. The nurse who works for my GP for example, who had to perform some minor surgery on me today. I have had a small cyst in my upper arm for about twenty years. All of the medical people I've shown it to over the years have been underwhelmed by it, so I've never much bothered about it. All that time it just sat around doing its cystly thing until last Friday when it took advantage of the general decline in my immune system and did what it had longed to do for ages: it had a much delayed bout of adolescent pique and went feral. By Sunday, despite being dosed with antibiotics the thing was the size of a golf ball and was really starting to get my attention, not that anybody much would want to look at it. I am reluctant to condemn anything on such superficial grounds, but it was not, to put too fine a point of things, pretty. Hence today's minor surgery. The nurse is a pleasant woman a few years younger than me. She asked me to sit down and remove my shirt. She unrolled a toolkit that you could restore a Model T Ford with and began to deconstruct the recently self assertive lump. The nurse chatted about Waimate, where we have both lived and gave an interesting running commentary on what she was doing. She slashed, sliced, poked, prodded, scoured, pulled, pushed and scraped. She stitched me up and put on a patch. The table where she had done the deed looked like someone had just performed brain surgery on a rat. She cleaned it up and got herself ready for the next customer. I arranged to meet her tomorrow so she can do whatever it is that she is going to do next. This is her job, and I am very very glad that someone does it even as I rejoice that it isn't me.
I don't know what it would be like to deal with putrescence all day and every day but obviously people get used to it; even perhaps they find it interesting. You look at the rotten stuff for long enough and see it for what it is: the inevitable by product of a material system that is imperfect and fallible. You get familiar enough with it and it loses all its horror. For twenty years this little piece of corruption has squirmed away in the darkness, waiting its opportunity. Left alone, it might have caused me serious and long standing damage but against someone who faced it without fear and brought it into the light, it didn't last ten minutes.
That was the one on my arm. There are one or two others in deeper, darker, less material places that the nurse's example has prompted me to take notice of.

Dan Gurney said…
"Caused me serious and long standing damage but against someone who faced it without fear and brought it into the light, it didn't last ten minutes."

Well said. The shining light of non-judgmental attention has a strongly healing effect. What is required, and sometimes difficult to apply, is the will and courage to look.
11 February 2009 at 18:36

Alden Smith said…
Well said C - you boss him around -
If he won't do as he's told, threaten to serve him a meal on one of his old valuable Leonald Cohen or Bob Dylan LPs - that will have him complying in no time at all.
11 February 2009 at 22:00

Anonymous said…
So Kelvin, Clemency is Anonymous! I had wondered. Nice graphic descrip-tion of your procedure; as a very visual person, I felt like I was there with you...can hardly wait for the description of what they do with the deeper, darker blobs!
12 February 2009 at 20:35

Kelvin Wright said…
No, not Clemency. Someone younger, taller and cheekier who sometimes forgets exactly who it is that still pays her cell phone bill.
14 February 2009 at 17:03

Anonymous said…
No doubt learned it from somewhere - as my cheeky youngest son always says, when I suggest his behaviour is less than perfect - "the apple doesn't fall far from the tree, Mom".
14 February 2009 at 19:37