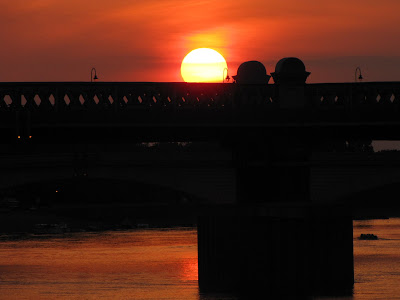 My grandfather, who I think had never been out of the South Island, always called England "home". Certainly it is home for Clemency and for nostalgic reasons, we entered it as she had left, 47 years ago, by ship. There was a fast train to Lille and then a slow one to Calais. After a bit of trouble finding the wharf - it was a public holiday in France and nothing, but nothing was working - we sat on the windy deck of a roll on roll off ferry, talking to a nice couple who were camino veterans and scanning the horizon for any sign of white cliffs. And there they were. White, and, no doubt about it, cliffs. For Clemency it was a powerful moment. She cried and sang Land of Hope and Glory. I thought of the reason she had never been back: that she had given most of her adult life to working for the Anglican Church on a stipend that made overseas travel utterly impossible. I thought of the fate and state of the wider church, and by comparison, of the wonderful support of our own parish, which had enabled this homecoming. For me seeing the White Cliffs was something of an anticlimax. They looked, very ordinary. Very familiar. Like... well... home.

After a taxi ride with an Italian driver who, in a very thick accent, loudly bemoaned the fate of England and blamed it all, without the least trace of irony, on all the bloody foreigners, we sat in another slow train, taking in some miracles. Like the fact that we could understand the conversations around us. Like the genteel English politeness of all the announcements. Shortly we will be arriving in Little Puddlehampton and Throckvale Common. Please mind the step as you leave the train. And marvelling at how familiar it all looked. I have read ten thousand books set in this countryside. I have seen all these hills and forests and croplands in a thousand films. I have watched The Avengers and The Professionals and Inspector Morse solve crimes amongst most of the villages we pass through. My intellectual furniture has been arranged by CS Lewis and John Fowles and AS Byatt who have set it all up in an irreducibly English way.

We were met at Waterloo station by Nick who led us into the maze of the underground and through places whose names are as familiar to me as Pahiatua or Upper Hutt. Granted, there was some initial surprise that it wasn't all laid out exactly as it is on the Monopoly board, but there is the strangest, strongest sense of homecoming about London. I need this as I try to refind a place in the church which grew in these islands.

England, and it's church are wonderful and bizarre. I saw the changing of the guard at Buckingham palace. Grown men in red coats and preposterous hats stamping and shouting at each other, and marching about blowing trumpets. It was pure Monty Python. A pom standing behind me said, Isn't this spectacular? He was quite serious. I went to evensong in St. Paul's and was disconcerted to find the statues of the saints, familiar from so many continental churches, replaced by Victorian generals and politicians. The exquisite beauty of the choir seemed a little hollow in this wonderful building as I thought of it as spirituality harnessed for the purposes of the empire on which the sun never set. The ritual of the church, seen in that light was as silly as that of the palace. But then, yesterday, another evensong, this time in Westminster Abbey. Providentially I sat in front of a man with an encyclopaedic knowledge of the Abbey which he was imparting to the American tourist seated next to him. For 40 minutes he explained why the generals and why the ornate memorials to long forgotten flunkies of Victoria's government. We listened to an anthem by Henry Purcell who had been organist at the Abbey nearly 400 years before, and a dim light began to break. Began, note. I've got a long way to go before I can begin to understand the household cavalry.

Anonymous said…
Welcome to England, Kelvin & Clemency. I've discovered you blog and have been following your travels in Europe with much interest.

If you're doing 'the Anglican thing' & coming to Canterbury, I'd be pleased to show you around.

Brian R said…
I remember arriving in London in 1974 and feeling I had come home. It was probably partly due to having spent a month in Asia on the way over and being trapped in Iran by the Cyprus crisis. But I felt the same on later returning from the continent. Although a 4th gen Aussie, I have always had a deep love for England and, of course, Anglicanism. Enjoy your time there.
6 June 2009 at 08:56

Anonymous said…
welcome - by remote control - to Blighty. I hope you have a fab time with Nick et al. One more tip to add to all the mountains you have received already - Westminster CATHEDRAL is far more interesting (and atmospheric) than the Abbey...
Also, sadly, the ne'er do wells in London are at least as accomplished as those in Spain and Italy - don't wave your maps around in the city centre, darlings. Sending protective prayers your way, and hopes for a wonderful time.
PS Interested in yr comment about AS Byatt putting a metaphorical sofa in "your" English living room. Have just finished her latest novel, the Children's Book - all her university-going characters go to Cambridge - just because she did! Are you planning a day trip there? Ely?
Jo F
8 June 2009 at 10:46

Kelvin Wright said…
To say nothing of cheaper.Westminster Cathedral is free, but the Abbey charges 15 pounds to get in, and something in me rankles at paying to get into a church, even if it is one dedicated to those two greatest of great saints: St. Commerce and St. Victory.

I think we'll go to Cambridge from Norwich. We spent the day in Oxford today. Lunch in the Rabbit Room of the Eagle and Child.
9 June 2009 at 05:37

Anonymous said…
Canterbury is much cheaper & you can enter free for services (how very kind, I hear you say). It's grand if not all that beautiful & you can see the spot where Thomas Becket died. Augustine's abbey and St Martin's Church (built on Romano-British foundation), the cradle of re-established English Christianity (AD 597), are both a short walk away.