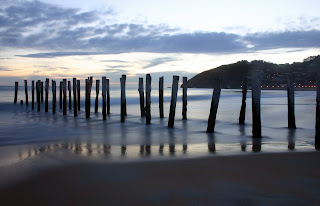 For a long time, I have used the role renegotiation model as a way of analysing relationships. This model acknowledges that all committed relationships - marriages, churches, tribes, families, clubs, whatever - have boundaries: there is a limited set of participants in the relationship and there are rules about who these participants are. If there are no boundaries then there is no relationship. People who participate in the relationship have expectations about how others in the relationship will behave and expectations about how they themselves will behave. In a sense, a relationship is an agreement -made formally or informally, consciously or unconsciously- about what these expectations are. Relationships break apart when expectations are not met, so it is important to know what the expectations are, and how breaches in expectations can be repaired.
Now I'm telling you all this because much of today's 14 hours of General Synod was spent dealing with issues of membership The day ended with a motion requesting the synod to define membership, and the matter wasn't taken terribly seriously. We Anglicans don't like defining our membership, and we don't like anything which might suggest we are excluding someone, which is a nonsense really, if the role renegotiation model has anything to tell us. The motion was dismissed fairly quickly, but the other matter which relates to membership was not quite so easily ignored. Much of the morning was taken up talking about The Covenant. Now I'm not going to spend a lot of time at this hour of the night talking about The Covenant but if you haven't heard of it, or don't know why we are talking about such a thing, as about 80% of Anglicans and about 99% of non Anglicans don't, you'll find an account of it here.
The Covenant is not something that individual Anglicans adhere to, or even individual dioceses; it is, rather, something that entire provinces of the Anglican communion are invited to sign up for en masse. Getting all of us in the Anglican Church of Aotearoa/New Zealand to agree is going to be quite a task, but necessary I suppose, if you think that the ultimate aim is to have The Covenant encompass all 80 million people from around the globe who identify themselves as Anglicans. The text of The Covenant has four sections. The first three define what it means to be an Anglican church with regard to practice and belief. In terms of the role renegotiation model they define expectations: what we might expect an Anglican province - ours or someone else's- to believe and how we might expect them to act. So far to good: we can more or less agree on these three. It's when we turn the page and start to read section 4 that our Anglican livers become all lilyish, because section 4 defines what will happen if we breach the expectations laid out in the first 3 sections. Not that the penalties are all that severe; we are Anglicans, after all. It seems that the ultimate threat will be exclusion from some committees and boards and commissions and so forth, which, after 14 hours of synod, holds less horror for me than it might have done at 7:00 this morning. But as the lawyer in The Castle said, it's the whole vibe of the thing that counts. It's the prospect of the world wide communion breaking up because we can't reach agreement on basic doctrinal and ethical issues which lies behind the covenant. This fear is the impetus for signing up, and, paradoxically, it's also one of the reasons we are so reluctant about committing ourselves. The other reason, for being nervous about The Covenant is, of course, a deep uncertainty about who we are. What is an Anglican? It seems we are a bit anxious about even asking the question.
So, faced with this uncertainty, we have taken a truly Anglican stance on The Covenant. After agreeing in principle to the first three sections, we have decided to talk about it for another two years before making a decision. Who knows? Perhaps in the time before the next General Synod we will come to some agreement on Anglican identity which will enable us to make a principled stand together, either for or against The Covenant and nobly bear whatever consequences may arise from that decision. Or perhaps we are secretly hoping that events will have overtaken us before we need to commit ourselves one way or the other.

NIE said…
"It's the fear of us in Aotearoa/New Zealand finding ourselves excluded that causes us angst. This fear is the impetus for signing up, and, paradoxicallly ....."
That sends alarm bells when you talk about fear, so I was glad to read on Anglican Taonga website what Bishop Victoria had said in her introduction to the day.

Pray that people in the pews may just keep going out into each week being what God directs them to be in Aotearoa/NZ over the next two years and pray further that attitudes will change because of the way(s) parts 1, 2 and 3 way are adhered to down here at the bottom of the Communion.

Thanks for your reflections - and the humour! May this day go well for you all.

P.S. Bit worried about the variation of the Blogspot header for the photo of the day yesterday, though. Remains of a broken-down former wharf leading to nowhere? Oh well ...
11 May 2010 at 08:49

Alden Smith said…
“To seek to transform unjust structures of society” as the Church stands vigilantly with Christ proclaiming both judgment and salvation to the nations of the world, and manifesting through our actions on behalf of God’s righteousness the Spirit’s transfiguring power.

Having said that I actually wonder about the correlation between these sorts of covenants and actual everyday practise. The Catholic church has all sorts of written obligations and proclamations regarding for example birth control, yet most of Catholic Europe has nil population growth - writing convenants can sometimes be a way of trying to insure against the need for future struggle, resolution and enlightenment, but reality always has another agenda.
11 May 2010 at 17:25