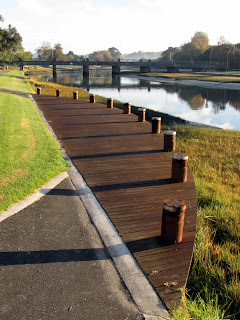 I used to be a member of General Synod some years ago but not for long. The Church has to administer itself, and I was happy that somebody should spend a week every two years doing that, just so long as that somebody wasn't me. But now I have been admitted to the order of the purple shirt and attendance at General Synod comes with the job, so here I am, sitting in a hotel room in Gisborne having spent the day in Holy Trinity Church hall listening and, occasionally, talking. Today was the opening day of the interdiocesan conference. This is the gathering of the 7 Pakeha dioceses who meet together briefly before joining the Maori and Pasifika dioceses in the General Synod which begins tomorrow afternoon. The venue of the synod changes from year to year, and for 2010 it is in this laid back little East Coast city where I have not been since our family spent holidays on the beaches just north of here about 14 or 15 years ago.
Gisborne reminds me of Invercargill. The hotel here has a swimming pool and the streets have palm trees, neither of which are terribly common in Invercargill, but both cities are about the same size, both are flattish and there is something about the size and placement of buildings which makes the two places evoke one another. Both are at the end of their respective lines and have a feel of isolation about them. And both show signs of a recent and significant upswing in fortunes, with a consequent aura of self confidence and prosperity wafting about the downtown streets. I flew in on Friday in one of this little planes where you look out over the pilot's shoulder and see the view from the front. I dragged my oversized suitcase (episcopal robes, suit, clothes for a week, candles, large canvas map of the diocese - don't ask) into the Emerald hotel and was surprised to be given a share in a suite only slightly smaller than Mosgiel. I found my way to the opening service at Holy Trinity Church where they have a vicar with almost indecent levels of youth, confidence, competence and enthusiasm and prepared myself to spend the next 7 days fighting off sleep.
So far it has been fine. There are lots of old friends and many newly met people to catch up with. We had a welcome onto one of the local maraes, speeches and a number of good meals. We have listened to each of the dioceses present themselves to the others and discussed common concerns. Issues such as pay rates for youth workers have been dealt with swiftly and sensibly. Perhaps it won't be so difficult to stay awake after all. Brian Thomas has asked me to write a sort of daily log for Taonga magazine, so I'll keep you posted.

The Love of Jesus, All the Saints, Our Almighty Loving God, and the Holy Spirit are with you, in Gizzy.