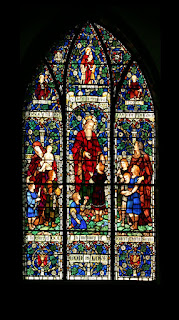 I was back at St. John's Roslyn on Sunday morning. It was my first episcopal duty; that is, the first time I was doing something that only a bishop can do. I was confirming 7 people, all of whom I knew and some of whom I knew very well indeed. Two of them I had baptised and several of them I had companioned for some years as they walked the narrow path. I entered that familiar physical space, where everything was so familiar: the way the morning sun plays through the glass, the shapes of doors and candlesticks, which pews were in the church when I arrived in 1999 and which ones I brought back over the hill from Mosgiel on Alan Dunbar's trailer. I entered an emotional space as well, and one which was paradoxical. I felt instantly at home and instantly that both I and the parish have moved on; that I was now on territory where it was no longer my task to call the shots but to encourage other people to call the shots.
I walked down the familiar aisle wearing still unfamiliar vestments. I preached and confirmed and celebrated the Eucharist. I went to lunch where I tried to talk to as many people as possible, knowing that I wouldn't be seeing them next week. Several people took the opportunity to ask me questions on very significant matters of faith, knowing that they wouldn't be seeing me next week. I asked a couple to phone my PA and make appointments. I bought a few sets of the attractive parish bookmarks which had been made from photographs I had taken in years gone by. I have 34 parishes now which I call my own. There are 63 churches, none of which, like children, can be named as favourite, not even this one which holds so many memories and in which I grew so much. So, I drove out past the wonderful old house where my family had celebrated so much together, out across the city to the place which already feels like my home, to spend a good deal of the afternoon reviewing the strategic plan I will present to the diocese in September, straining to see what the Spirit might be saying about the road ahead.
In the evening I went to the cathedral where my seat is housed and listened to the choir sing evensong. I preached, not the sermon I had prepared, but one which my feel of what was happening in the place demanded. I felt the love of God for that big empty building. And in two weeks I will return, for another confirmation; more people moving on down the path, as are all of our 34 parishes, all of our 63 churches.

Elaine Dent said…
"I preached, not the sermon I had prepared..." There's something similar about the "moving on" from a place/congregation and the ability to move on from our prepared sermon notes. I find the first difficult and the second frightening :) Maybe the similarity between the two is in the opening a window for the Holy Spirit to do the leading. I'll get a chance to exercise those muscles in the first aspect since my husband lost his job on Monday, and in some sense we must move on (figuratively if not literally). As for the preaching, the more I listen to what God is doing in the moment, the more God makes suggestions that have nothing to do with what I've prepared. Thanks for your insight; you set a good example for this pastor.
21 June 2010 at 23:08

Kelvin Wright said…
Elaine, I am sorry to hear about your husband. It's a scary thing - financially but also in terms of identity and other deeper, less apparent issues. I'll remember him and you when I sit quietly in the next few days.

Switching sermons wasn't such a big deal. One of the set readings was the woman with the flow of blood, and that's a passage that always moves me deeply and about which I have thought a lot over the years. And, providentially, it carries themes I thought the congregation needed to hear about. I think they needed to hear the stuff I had prepared also, but it would have been a bit heavy, so not now, not yet.
22 June 2010 at 11:49

Kathryn said…
Hi Kelvin, coincidentally, I too was just reading about the woman with the flow of blood. I am reading "Extraordinary" by John Bevere. And it is Extraordinary too! We are studying it in my home group.
God's Mercy & Grace are amazing. He is so good to us, and we are not always good in return.

It seems there are a lot of changes in your life now with your new position. But you seem to be managing it well. It must be hard going back to St John's, to the people that you know so well and seeing your previous home where so many family memories are. Its not a clean break like most of us have when we move on to something new in our lives.
I wish you well always, Kelvin. :-)
23 June 2010 at 15:43

NIE said…
The word "prodigal" always brings me back to these words of Henri Nouwen about the famous painting.
And it goes well with the main St John's window you've posted (on which, incidentally, I hope readers will double-click to see its fuller beauty and message)

"The Embrace of Love"
Here is the God I want to believe in: a father who, from the beginning of creation, has stretched out his arms in merciful blessing, never forcing himself on anyone, but always waiting; never letting his arms drop in despair, but always hoping that his children will return so that he can speak words of love to them and let his tired arms rest on their shoulders. His only desire is to bless.