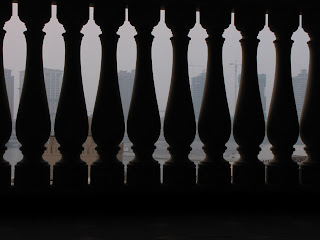 I’m not really a business class sort of person. The thought of paying the price of a pretty reasonable second hand car for a couple of glasses of champagne, a meal or two and the rental on a chair for 12 hours sticks in my craw a bit. But here we were, for reasons I won’t bore you with, taking the right hand gangplank and heading uphill to the top story of the world’s largest airliner. And here we were being shown to our seats, and by seats I mean cubicles, by an astonishingly pretty young woman in that particularly elegant uniform worn by Emirates cabin staff. There was a sort of bedside cabinet thing containing a minibar, yes really, and spaces to stash your stuff. There was a TV screen not much smaller than the one we have at home, and if the effort of reaching across to work it was too much, two, yes two different remote controls to fiddle with. There was an armchair with lots of Homer Simpson seat goes up seat goes down doohickery going on. If you got bored with more TV channels than there are grains of sand on the Earth and you couldn’t think of anything else for the cabin staff to fetch for you it was always possible to retire to the back of the plane to a bar with a continuous stream of whatever you wanted to dope yourself with and lots of convoluted little things to eat. When the ridiculously beautiful women in the headscarves thought it was time for lights out they came around dishing out little mattresses and showing you how to make your seat lie completely flat and turn into a bed.It was all fun, but it was still hard to sleep, what with that dry, fluffy airliner stuff that they put through the airconditioning system in lieu of air and the fact that lie flat or not, sleeping in an aircraft seat is still sleeping in an aircraft seat.

I watched Sherlock Holmes, and even from the middle of the Indian Ocean could hear poor old Conan Doyle spinning in his grave. I watched two entire BBC series on gifted children. Using the cameras mounted on the nose and tail of the plane I watched as we flew over Dubai and the pilot performed that bit of everyday magic, dotting down 500 tons of aluminium travelling at 320 kph, without causing so much as a ripple in anyone’s champagne. We had three hours in Dubai in a lounge that was, quite seriously, bigger than the entire Dunedin International airport. Then we flew in a very much smaller but only slightly less luxurious plane to Doha.

The customs people were all women, all speaking rudimentary English and all wearing a full abaya with the total black head covering and the full nine yards. One of them stamped our passports then we walked through the doors to the terminal where Scott and Bridget were waiting and outside into air that felt like a sauna. And outside into this baffling city.There is an old Doha, all dust and grit and low buildings the same colour as the grit. There is an endless coastline where once the population eked out a meager existence as pearl divers. And there is a new Doha, built with the money, oodles of it, they have got in the last few years from flogging off the oil which lies under their feet. We drove past a large area of reclaimed land on which stood huge postmodern buildings : tower blocks of offices and apartments forming a new downtown which has arisen from nothing – literally – in the last six years. We drove to The Pearl, the district where Scott and Bridget live, which is a tourist and residential resort with cafes, a marina, upmarket shops and all that goes with them. It has arisen from nothing – literally –in the last three years.

Everything is in a process of being made. Cranes are everywhere, as are armies of blue uniformed immigrant workers. All is being done quickly but well. The new bits are tastefully designed, well laid out, sturdily built, well provided with services. A major modern city is rising out of the desert, and, in places, the sea bed and there is only one thing missing: people.There are large malls with shops for Ferrari, Bulgari, Yves St. Laurent and Rolls Royce with nary a shopper in sight. There are apartment towers with apartments and lifts and swimming pools but precious few tenants.

We went to Scott and Bridget’s place. We looked around the tower block which housed it, taking in the lavishly equipped gym and the half Olympic sized pool and the two spa pools bubbling incongruously in the Qatar heat and the staff of Filipinos continually polishing the empty marble floors. Later we caught the water taxi across to an excellent but empty restaurant for lunch, past a marina with only a dozen or so super yachts moored at its capacious jetties. Doha is the opposite of a ghost town – the population haven’t mysteriously left, they mysteriously haven’t arrived yet. And I’m not sure anyone knows when they will arrive or quite where they will arrive from.