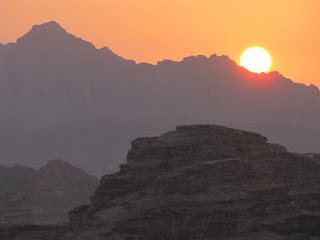 Friday was our last full day in Jordan. We left Wadi Musa at Midday and headed for Lawrence of Arabia country. Wadi Rum, where we arrived in mid afternoon is a thousand square kilometres or so of sand, basalt and sandstone. It is the place where T.E. Lawrence did his bit for the Arab revolt and where the 1962 film about him was shot. We were taken for a hair raising ride through some of it in a beat up Nissan Patrol driven with consumate skill by a Bedouin driver who could not get his tongue around any of our names, except Scott's. "Ah," he said," like Saddam Hussein! Scud!"  We spent the night in tents, albeit ones equipped with beds and mattresses, but sleep was scarce on account of the heat and of the Lebanese girls dancing to very loud Arab pop music.

Wadi Rum is a place of  quiet and power and beauty. You know what they say about the relative worth of pictures and words so: 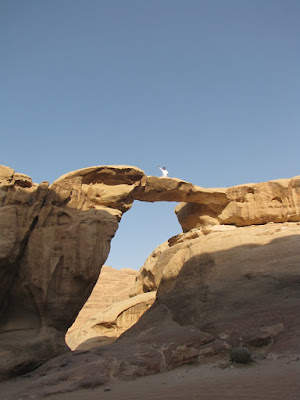 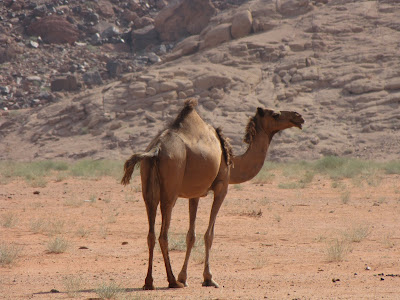 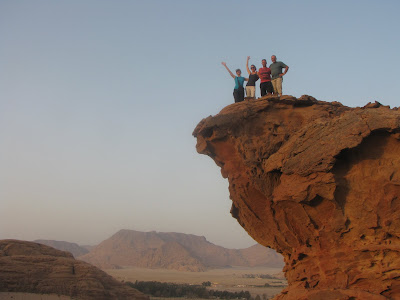 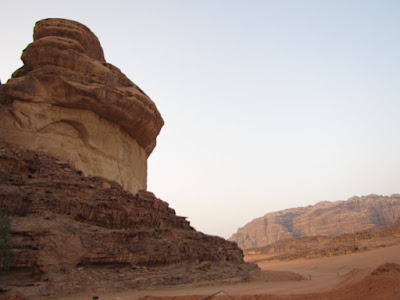 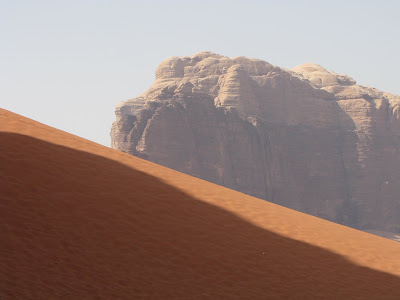 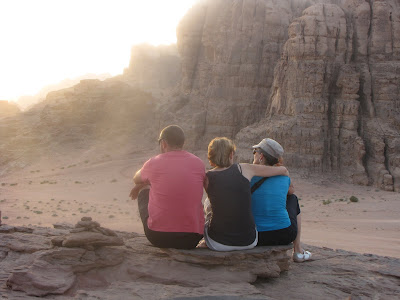 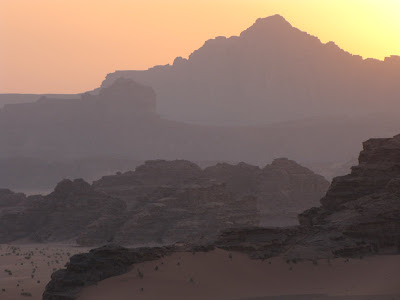 Elaine Dent said…
Your photos and descriptions are marvelous. Thank you so much. My brother has been trying to get me to come out to our western deserts, Arches and Zion National Parks. His photos remind me of the Siq and Wadi Rum...minus the camel and Arabic pop music. I may never get to Jordan, but you have given me an extra nudge to explore territory ONLY 2000 miles away that I can reach without a passport. Meanwhile thanks for helping us travel on our laptops to see a non-newscast version of this part of the world.
20 July 2010 at 04:57

Fran said…
This is brilliant. I was there in 2006 - you've captured it well. What can be captured in a photo that is. Gorgeous.

As an American woman traveling alone (well with a guide but not a tour or a man!) my return home was met with many queries about fear. And all I could talk about was awe! I am reminded that biblically speaking, they are the same thing!
20 July 2010 at 05:03

Kelvin Wright said…
Elaine, you MUST head for the desert. My first experience of a desert was the Mojave, just out of Las Vegas. four of us stopped our car and walked about 15 minutes to a bluff and sat. Gradually all conversations died as we were engulfed in the UTTER silence. For the first time in my life I experienced absolute silence, where a crow calling 5 miles away could be heard distinctly. We sat for a long time, before, without speaking, we rose and left. On the way back to the car we realised we had all thought of the same passage: Elijah before the cave with the wind and fire and earthquake. For the first time in my life I understood that passage. I reread the Hebrew and realise it doesn't say God is in "a still small voice" it says God is in "the utter silence" ; and I understood why the monks went to the wild places.
Death Valley is worth the look for its grandeur and beauty but its full of tourists. Try the valley of fire outside of Vegas. Find a spot seldom visited and experience one of the earth's great treasures: the life affirming presence of a landscape that can kill you if you are not careful.

My great regret about Wadi Rum is that we weren't there long enough to know its silence. There were the lebanese girls, and the 4X4s and some guys building a wall, and a bit of a wind and...but still, rising early in the morning I walked out into the sand, and quite distinctly heard the conversation of some women who had climbed to the top of a small mountain about 2 miles away.
20 July 2010 at 07:42

Kelvin Wright said…
Fran, one of the big misconceptions about Arabia is this thing of safety. On the negative side you have a tiny, and I mean infinitesmally tiny, chance of getting caught up in some political act or other. On the positive side, your chances of being mugged, set upon, molested, stolen from or cheated are equally tiny. I felt safer in all the places we travelled than I would in any Western city I can think of. The overwhelming impression I take back from Lebanon and Jordan is the decency, honesty and kindness of the people.
20 July 2010 at 07:51

Have you been to central Australia? Some of the most beautiful sights I've ever seen were around Uluru and the red centre.

Merv said…
Hi Kelvin,
We leave for Jordan on Monday ... Wadi Rum on Friday.
Perhaps "I'll be seeing you, in all the old familiar places ...". Who knows.
Thanks for hanging in there with the blog. We do enjoy reading whatever you are able to offer.
Warmest regards, Merv
14 May 2011 at 13:24