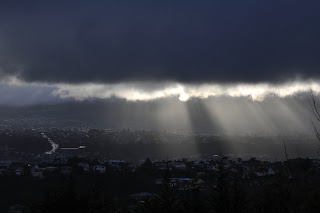 David Whyte speaks in his audio series What To Remember When Waking of the myth of the Tuatha De Danann. They were a mythical race from Ireland's past who were tall, magical, mystical people devoted to beauty and artistry. When another more brutal people, the Milesians invaded Ireland the Tuatha De Danann fought them off in two battles, but were faced with a third, decisive battle against overwhelming odds. So, lined up in battle formation and facing almost certain defeat, the Tuatha De Danann turned sideways into the light and disappeared.

Whyte's retelling is, to put it mildly, a gloss, but I am quite taken with the phrase and with the phenomenon it describes. Turning sideways into the light is the realisation that there are some encounters that are damaging to all involved in them: no one wins a war. Faced with such an exchange, to turn sideways into the light is to seek another, more whole form of relationship. It is to reject the ground rules of the conversation as they have been laid out by your antagonist and choose another path which will extend, not diminish your integrity. Turning sideways into the light is a way of re framing Jesus' teaching in Matthew 5:38 ff: But I say to you, do not resist the evildoer... love your enemies and pray for those who persecute you. When faced with an act of cruelty and aggression which seeks to define us in the terms laid down by the aggressor, Jesus tells us to change the terms.  When the Roman soldier bullies us into carrying his pack, turn the oppression into an act of camaraderie.

Turning sideways into the light  is not retreat and it is not cowardice. As Gandhi demonstrated on the salt marches,this is a shift in consciousness which requires considerable courage and integrity. As Te Whiti showed at Parihaka, this is not necessarily a strategy whereby we will "win"in the immediate tactical sense, but it is the only strategy by which we can retain our sense of values, and, as history has shown in both of these examples, it is the way by which righteousness will ultimately triumph.


TOBAR PHADRAIC
Turn sideways into the light as they say
the old ones did and disappear into the originality
of it all.  Be impatient with explanations
and discipline the mind not to begin
questions it cannot answer.  Walk the green road
above the bay and the low glinting fields
toward the evening sun.  Let that Atlantic
gleam be ahead of you and the gray light
of the bay below you,
until you catch, down on your left,
the break in the wall,
for just above in the shadow
you’ll find it hidden, a curved arm
of rock holding the water close to the mountain,
a just-lit surface smoothing a scattering of coins,
and in the niche above, notes to the dead
and supplications for those who still live.
Now you are alone with the transfiguration
and ask no healing for your own
but look down as if looking through time,
as if through a rent veil from the other
side of the question you’ve refused to ask,
and remember how as a child
your arms could rise and your palms
turn out to bless the world.
~ David Whyte ~

Lori Anne said…
Recently I attended an event where David Whyte was the speaker. He told a story of "turning into the light" that so resonated with me, that I searched again for it today and found your beautiful essay. When I heard David's explanation of the phrase, I felt an immediate connection to the teachings of Christ, a connection that had been rattling around in my heart until I read it so beautifully articulated here. I have been reading some of your other posts as well, and truly enjoy your writings.
All good things,
16 October 2011 at 03:35

woodchuck said…
Thank you so much for this! I recently had an interaction where I felt I had to do this. I e loved this poem for years but really enjoyed your commentary on it.
17 January 2020 at 06:58