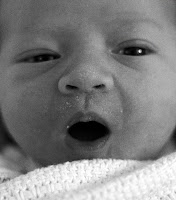 Last night I became a grandfather. Naomi Yin-Leng was born to my daughter in law Charmayne and son Nick in Sydney at around 11 pm our time, and suddenly the world is no longer the same.

Thirty something years ago Nick was born in Christchurch, the first of our three, and the world changed then, too. Up until the moment he came blue and reluctant into the world he had been a possibility: a squirming bulge in Clemency's body. He had been imagined and read about and even viewed as a grey fuzzy blob using the steam and treadle powered ultrasound scanning machines of the 1980s; but nothing, absolutely nothing had prepared me for the experience of holding my first born, and looking into his eyes and having a person look back. In that instant the whole miracle of  Being presented itself; in the space of nine months the exquisite machinery of a human body had been formed, but more astonishingly still, a consciousness was now present within it. In that instant the boundaries of my self collapsed in the delicious uncertainties of love in order that they might reform again around him. All the intelligence and inquisitiveness and inner strength which have marked his life since were present in St. George's hospital that early morning. They didn't grow, he arrived with them.

And so with Naomi. She too has been a possibility: an exciting secret last Christmas then a series of reports from the obstetrician then some ultrasound pictures, albeit of an infinitely higher quality than Nick's, then a growing bulge above Charmayne's belt line. We have known her name for some weeks now, and even known something of the contours of her face; but then last night she was suddenly a very present person, as much to be considered and with as much right to command my love and attention as any other member of my family. Again I was unprepared for the reality of her. In the middle of last night, the boundaries of my world shifted to accommodate her, as I moved up a row in the generational hierarchy, one more tier further from youth, one more tier closer to infinity.

So now it is shuffle around time. I need to see how my timetable can be fiddled with, like one of those puzzles where you move the numbers on the little sliding plastic squares into their proper order, so that the blank space falls on a couple of days where I might be able to nip over to Sydney. I have seen her, even if it is only Skype but I do have an urgent need to know the touch of her skin, and the tightness of her grip on my finger and the exact weight of her tiny but determined little body in the crook of my arm.

Is your daughter-in-law Chinese?

Kelvin Wright said…
My daughter in law is an Australian of Cantonese descent. Naomi has Pakeha, Australian, Chinese, English, New Guinean, Scottish, Maori, French and other cultural streams she can legitimately call her own.
25 August 2011 at 11:51

Anonymous said…
Great. My wife is half-Chinese, but the only "cultural" stream this has given our kids is the expectation that their parents will stump up lots of cash on Chinese New Year (which they do). But at least they can use chopsticks. I've tried suggesting filial piety and reverence for elders should be part of their "cultural" heritage but they're not convinced.
Much joy in your new role, revere(n)d grandfather!

Verna said…
Congratulations to Grandad and Grandma. She looks so gorgeous. Hope you can shuffle things really soon so that you can get to Sydney!
26 August 2011 at 10:49

Wynston said…
Welcome to the grandparent club. It's a great experience.

Susan said…
Congraulations Kelvin & Clemancy on the arrival of your wee grandaughter. I really appreciate what you wrote,which was beautiful. Allan & I were present at our grandson's birth. It was very special being there. Grand children are really special.

Eric Kyte said…
Congratulations to you All

Not Quite at the point of Grandparenthood, Yet :), but the point about Skype really resonates. I Do wonder if in this technologically advanced age we too readily acclaim its gains without adequately mourning its losses.

The Gains are VISIBLE, shouting at us left right and centre.

Kelvin Wright said…
All the same, Eric, even though it's not really the same as being there, I'd rather Skype than no Skype.
4 September 2011 at 20:29