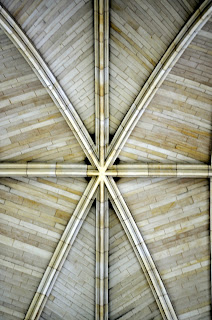 Buildings have been the overwhelming motif of year so far. Putting them up. Caring for them. Insuring them. Thinking about knocking them down. The problem we have in the Diocese of Dunedin is  a larger number of unreinforced masonry buildings than any other diocese in the country and a decreasing pool of people willing and able to look after them all. Although we weren't directly affected by earthquakes in the past year, we have, like everyone else in the country, been affected by the consequences of Christchurch's disaster in the form of increased insurance premiums and the prospect of seismic strengthening. Our insurers, EIG Ansvar, pulled out of the New Zealand Insurance market at the end of last year and now, nearly four months later, we are still in negotiation with brokers concerning what we are to do next. Over the past few months I have learned more about insurance than I ever really wanted to know, and I won't bore you with it all here other than to state the obvious: we are going to pay a lot more for a lot less from this point on.  We are legally obligated to insure some of our buildings (for example schools and hospitals) and our own statutes require us to insure the rest, at least in the meantime. As far as strengthening goes, it costs a lot to have an engineer take a look and tell us what needs to be done, and then a lot more to actually do it.

Our congregations are many, widely scattered and sometimes very small. Few if any of the members of our diocese were attracted to our church by the prospect of becoming custodians of heritage real estate, but having become part of a group meeting in some interesting pieces of old architecture, most have, up until now, borne their responsibilities diligently.  Over the past many years our buildings have been, for the large part, lovingly and fastidiously maintained. But now faced with the costs involved in strenghtening and insuring, some congregations are starting to blanch. They are asking, quite justifiably, whether these lovely old hunks of stone are really worth the trouble. In real terms, the costs of maintenance and refurbishing is completely beyond the resources of some of  our parishes.

There is no easy way ahead. The building in our care are often valued by communities far wider than our own. They are subject to interest from the Historic Places Trust  and various local bodies. Demolition is not an option, and given the by laws of some regions of our diocese, sale is not practicable either.

It is not all bad news of course. The debate about buildings has caused a much deeper and more wide ranging discussion about the Church: what is it apart from its places of worship? What are we called to be and do? I have been greatly heartened by the consensus that has emerged in every single place where this discussion has been held; that, the Church is a gathering of people, not a pile of bricks, and that we must not allow the issue of where we meet to distract us from the real business of living and proclaiming the Gospel. We are not about to abandon our historic places of worship but neither will we allow their concerns to destroy us.

Eric said…
Thanks Kelvin
Its good to hear your reflection upon the heart of folk around the diocese. Yet it is troubling. Christendom may well be dead, but her Shadow hangs heavy.

For some reason, Albatrosses come to mind :)

Goodness knows what Avian metaphor I'd come up with in England, where Church and State mechanisms are more inextricably linked, and local relationships with buildings go back a few more generations.

I'm reminded of driving past so many such buildings which had undergone 'change of use' :)

No matter how you looked at it - the building no longer 'reminded one of God' when turned into a carpet warehouse, a nightclub or a radio station.

It will be interesting to see how this devlops. Given the current state of things, one may not have to wait as long here as in England
16 March 2012 at 20:59

Elaine Dent said…
Even in North America, we are beginning to ask similar questions. But I also wanted to comment on something else: you wrote several months ago that you were hoping to walk "El Camino de Santiago" this year. Just watched and re-watched the movie "The Way" with Martin Sheen and Emilio Estevez. Loved the way traveling companions one falls into are not always chosen, but can be a strange gift. Such was my son's experience on the AT last year. The movie also conveyed that the calling to go on a pilgrimage cannot always be verbalized and we may end up learning something about ourselves that we didn't expect. Besides the scenery is great---not as beautiful as NZ, of course. Hope you can get hold of it.
17 March 2012 at 01:40

Kelvin Wright said…
I haven't seen the movie yet Elaine but I will. The travelling companion phenomenon is true: on the Camino you develop very close links with the people you are accidentally thrown together with; they become your "Camino Family". it's one of the reasons travelling it alone, or at most with one other person is vastly more preferable to travelling with a group.
17 March 2012 at 13:21

Kelvin Wright said…
I expect the movie will have another effect too: more pilgrims. When we last walked the path of miracles in 2009 there were many Koreans; a popular Korean TV personality had recently walked it and written a book,with obvious consequences. Great for the local Spanish people who make their living out of the Camino, but not so great for those who like less competition for bed space in the albergues.
17 March 2012 at 13:26

Kelvin Wright said…
Change of use is becoming problematic here, Eric. some local councils require that when a building changes use it be bought up to 100% of the building code. So before you can even begin to turn the cute little church into a quaint little bar you have to spend a few hundred thousand. It renders nearly all our buildings worthless, at least, as far as the real estate market goes. I will be interested to see who if anybody buys your neighbouring Roslyn Presbyterian Church.
17 March 2012 at 13:29