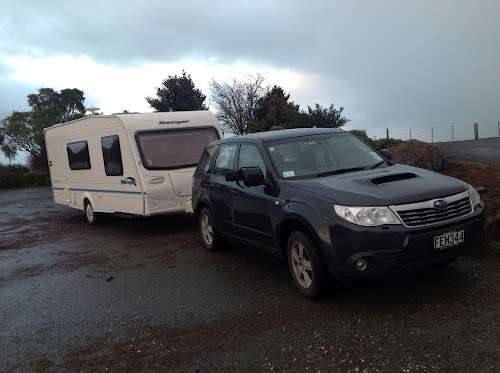 Yesterday I bought a caravan. Bishop Alan Pyatt used to have one, a moveable home base for he and Molly as they journeyed around the Diocese of Christchurch back in the 70s, doing the work of Christendom. Now at the end of Christendom, I have had, for as long as I have been bishop, the sneaking suspicion that I should have one too. I wanted to be able to be anywhere in my very rural Diocese to stay, and to talk, but mostly to listen. So yesterday was the day.

I have never had much to do with caravans; well apart from a heavy old trailer thing we used to own, with a floor that dropped down and suspension made from, and I am not making this up, used inner tubes. It was made of plywood and angle iron and weighed more than the Queen Mary, and yes that is an exaggeration but only a little one. So not knowing much, I googled and looked around. New Zealand caravans are old fashioned, heavy and expensive. Australian ones are funky, heavy and very expensive. Imported English ones are light, well designed and comparatively cheap, so English it was. I found a little business in Palmerston run by a wonderful English woman named Amanda and her Kiwi husband Geoff. Amanda's dad apparently spends his time scooting round the English countryside looking at caravans. When he finds a really good one he buys it, puts a few stamps on the side and posts it off to Palmerston. There are a lot of dodgy English caravans around - stolen, rebuilt insurance write offs, leaky, shabby, all that kind of thing but you won't find any of them in Amanda's showroom. Her stock is- all of it - immaculately presented, in great nick, legitimate, and very competitively priced. And she has a great customer service ethic and a fastidious attention to detail and knows A LOT about caravans. So I bought one, and yesterday towed it home.

It's bigger than I had originally intended, but it's very comfortable, is insulated and heated, has ablutions and cooking facilities and my middle sized car tows it easily. What with its great slab sides and the howling Southerly as I headed home over the Kilmog, I learned quite a bit about towing in a very short time.

I'm sitting in it now to write this and soon will sleep in it for the first of many times. I left home very early and was for once very glad that the forecast snow din't arrive as I navigated very familiar roads for what seemed like the first time. An hour ago I finished the third archdeaconry meeting in three days, this one as well attended as the other two. At the end of the meeting all present came outside while the Revd. Gillian Swift and a local Kaumatua blessed my Bailey Ranger 510/4L and then tramped the house ( a few at a time, obviously). And now I am alone at last. I want, over the next year, to visit every church in my Diocese, to stay beside some of them and pray in all of them. I will try to listen: to God and to the people of each district as the Spirit reveals the exciting news of what is to follow after the end of Christendom. I am really, really looking forward to it.

- Posted using BlogPress from my iPad

Elaine Dent said…
What a great idea for having your own quiet space in the midst of the space of others! We got ours 5 years ago in preparation for my sabbatical and have thoroughly enjoyed it ever since...although have never tried it in winter. Blessings on its journeys with you.
14 June 2012 at 22:57

Eric said…
But . . . the whole reason for coming here was to get away from the caravans!!

Kate said…
Capital idea. Your home away from home!
Insulated you say... Hmmm. You're giving me ideas. I was planning to sell my house this summer and travel overseas. Perhaps I should do New Zealand first.

Kelvin Wright said…
Hi Katherine. Big changes ahead huh? And perhaps behind as well. A caravan around New Zealand would be great. Caravans are cheaper than motor homes but the market is slower and you might have more trouble quitting it once your Aotearoa circumnavigation was completed - but that would depend on the time of year. You also have to weigh up the advantages both ways: campervans/morothomes are easier on the road (but only slightly!) vs there's usually more room in a caravan and you have a car to nip about in when you reach your destination. And you must remember that caravan ownership puts you forever on the seriously uncool list of any true petrolhead, particularly English ones. The prices we pay!

Amanda's business is called Caravan Connection and it's in Palmerston SOUTH not North. I have fixed the link, and hope it works for you now. She will ship her caravans to Wellington for about $1,000, but no doubt there are any number of reputable dealers closer to hand.
25 June 2012 at 07:23

September 26, 2020
As it has for many people, Netflix's documentary The Social Dilemma  has rocked me back on my heels a bit and caused me to rethink my engagement with social media. I've also been reading Jaron Lanier's Ten Arguments For Deleting Your Social Media Accounts Right Now  . OK. I'm kind of getting the point. So instead of browsing Facebook,  I pick up my cameras and head for Tomahawk. The lagoon is covered in little swan families: mum, dad and the kids all busy breakfasting on duckweed.  Each of the many dozens of families has a half dozen or so cygnets. They vary in size, according to their age but with their little fluffy bodies and beady little black eyes they are irresistibly cute.  Their parents feed them by plucking weed from the bed of the lagoon - growing at depths beyond the babies' reach,- and dumping it down before them. The little guys wolf it down before it slowly sinks.  They are covered in a hairy down, which seems to be easily soaked. Occasionally they s
2 comments
Read more

September 12, 2020
When I was about 4 my grandfather bought a 1951 Wolseley 6/80, exactly like the car on the left, above. Last week the car was loaded onto a trailer and moved from my brother Alistair's garage to somewhere in Auckland where some bloke  is going to restore it. I saw the pictures of this end of an era, with a few pangs of regret at not taking up Alistair's offer to give me the car, and thought of my brother, who died this year before he could do the work of restoration himself.  And I remembered a conversation I had with Alistair on the day when Pop brought the new car home. I asked Al when the Wolseley would start to turn square. It was a perfectly logical question. Pop's previous car had been a 1927 Pontiac. I knew that old cars were big and square, like Old Pontie, and new cars were smooth and rounded like the Wolseley. Obviously, like plants, people, cats and many other things in my universe, at some stage cars must change shape, and I was interested to learn about that p
Post a comment
Read more