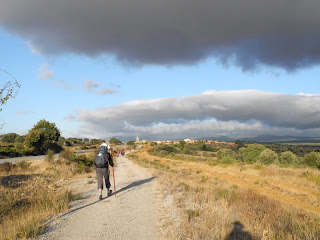 I am writing this from a disused convent in a derelict town on the top of a mountain in Spain. I  have paid good money to be able to write that sentence, and I will savour it for a while.

The camino is changing. The impact of the movie, The Way, has been enormous. I am told that a few nights ago 1000 people passed through Roncevalles in one day, more than any single day in the recent history of the Camino, and this in the shoulder season. I am grateful I am a few weeks ahead of that lot. Most of the new flood of peregrinos are, of course, Americans and Irish. I hope, selfishly,  that this is a passing fad because the infrastructure of the camino simply won´t stand those numbers, but I suppose it will all sort itself out.

For us, without the influx of people inspired by the film, we are still dealing with pilgrims we aren´t used to. From Leon on, there are a whole lot of people who don´t fancy themselves as fit enough for the whole journey so they´re doing the last bit. There are people who have their bags carried for them from place to place, and some who are busing large chunks of the track. They have quite a different attitude than we are used to. For them, the Albergues seem to be not so much meeting points for the travelling fraternity of the blistered and the sun burnt, but rather, very low end hotels. Last night in Astorga in our lovely old Alberge a bunch of elderly French - in their early 60´s at least - swanned in after their nice dinner out on the town somewhere, turned on all the lights and began a conversation in loud voices as they did their 60 year old´s bed preparation routines. I woke from my sleep , listened for a while as the pajamas  (pajamas!!!!) were fitted and the dentures scrubbed. I was about to say something very unepiscopal when Clemency saved me by reprimanding them severely (for her) but gently (for anybody else).

The upshot is that we have decided to make smaller towns our destinations from this point on. Today we started at 6.45, got lost, but nevertheless managed to reach Rabanal by midday. Rabanal is a picture perfect little mountain village and at about 20 km from Astorga is the destination du jour for the bus peregrinos. We walked on another 7 km or so to this place, uphill through increasing cold. Foncebadon was a farming village until the Spanish military commandeered it for some obscure reason and wrecked it. It is now utterly derelict, except that a few of the buildings have been renovated for use as holiday homes or to serve the camino. 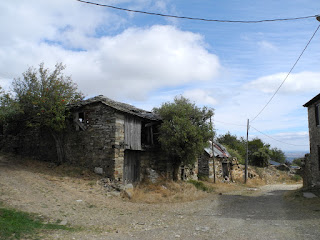 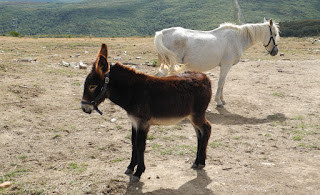 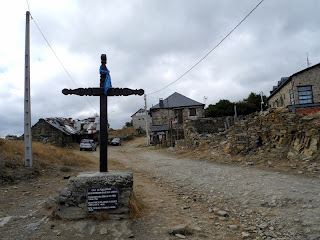 There are four albergues here. We have set up camp in the one built into the old parish church. It is small and there is to be a shared meal later. The tariff is by donation, and it is scruffy and charming. 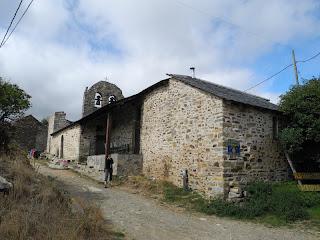 It doesn´t have Internet though, so we have walked down to the albergue built into the old convent. 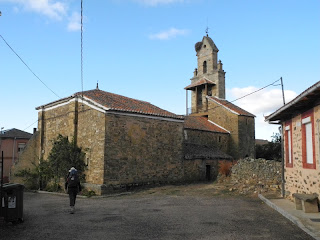 It is warm, has a bar, has Internet (obviously) and is chock full of people who have had their bags or themselves carried here by bus.

NIE said…
Next time try banging your "episcopal" stick three times on the floor - that might make them sit down and shut up!
Praying that the company will be more inspirational tomorrow.
25 September 2012 at 07:29

Anonymous said…
Hi
I really have trouble getting my head around what seems to be a up market "Disneyland" experience. While not far away some economic migrants are floating around in the Mediterranean on a camino of their own from Africa to Europe. What a crazy world we live in !
25 September 2012 at 08:22

Kelvin Wright said…
No, Elaine. it´s a bit more complex than that.

1) the film
2) The high unemployment in Spain. For people without jobs the Camino is a cheap holiday, but also is a recognised way for Spaniards to take time and seek God´s voice with an uncertain future ahead of them.

As far as the huge group of pilgrims currently making their way through Navarre, they are at least doing it properly. They have walked across the Pyrenees for goodness sake! Perhaps it is just the start of a whole new chapter in the long history of the camino, and even at 1,000 ppl a day, that is still lower than the prime of the Camino´s popularity in the middle ages.

The people who bothered us a few nights back in Astorga were different: People using the camino facilities but busing around the place, and with no idea of the ethos of an albergue. And, Elaine, they were French.
26 September 2012 at 02:28