And Still it Moves 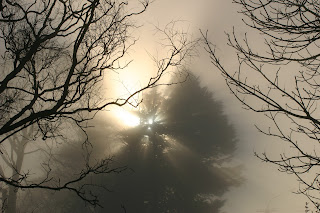 This past week was the anniversary of the trial of Galileo, and time for a predictable plethora of commentary all over the place along the good scientist bad prelates line. I have myself written about this in the past, here and here, and don't really want to do it again, but the pseudo argument sat jarringly with other happenings in my world. Particularly, I have been thinking about illusions. About lying, falsehood, deception, prevarications, elaboration of the truth, strategic silences and all the other devices behind which we hide from the light.

In the olden days we believed that the world was a big stillish thing, and that the sun was a much smaller moving thing. Why should we not believe that? It was painfully bleedin' obvious to anybody with eyes and more than two brain cells to rub together. Except of course it isn't true. And the realisation that it isn't true began for us Europeans in the late 15th Century with Nicholas Copernicus sitting on the roof of a Polish cathedral every night for year after year, observing the movement of the stars and the planets and saying to himself, "hang on a minute, something doesn't quite stack up here". He speculated that a mathematical model which placed the sun, rather than the earth, at the centre of the universe gave a better explanation of his observations, and in 1514 published his ideas. Nobody much read the book except pointy heads from Paris and Padua, but then why should they? It was just some crackpot theory from a bloke with obviously too much time on his hands and equally obviously not the common sense to see what was absolutely plain and clear to everybody else on the planet. Then, a hundred or so years later, Galileo armed with a new fangled invention, the telescope, which few people had ever heard of let alone seen, made Copernicus' theories available to a wider audience. Galileo couldn't make Copernicus' observations or his own ones fit with his (Galileo's) ideas on how the universe worked,  so he simply adjusted the geometry. He wrote his theory in the form of a hypothetical conversation between two blokes, one supporting the common sense view and the other the odd mathematical theory. It seemed obvious to most readers that the new theory character was a cypher for Galileo.  The dunderhead supporting the status quo had a habit of quoting Galileo's former friend, Pope Urban VIII, who, on reading the book, was not well pleased. It was all bound to end in tears.

So with the luxury of 400 years of hindsight, we look back and click our tongues at the princes of the church and fondly imagine that if we had been alive in 1614 we would have been on the side of truth and light. Hardly likely. Our growth into truth, as individuals and as a species, progresses partly through learning new ideas but mostly through us letting go of old ones, and what makes us think we would have sat any more comfortably with that than anybody else? Even Copernicus and Galileo were still informed by their own illusions: neither the Earth nor the Sun is actually the centre of the universe, and the universe is turning out to be a far different place than either of them imagined. And, no doubt, a far different place than any of us imagine either. This process of divesting ourselves of our illusions is not easy because some of the illusions (that the sun revolves around the earth for instance; or that matter is solid; or that time moves at the same speed everywhere; or that our personality exists) are so well supported by what we think we see every day of our lives.

Jesus said You shall know the truth and the truth shall set you free. Knowing the truth is another of those things which is simple but not easy, because to do it we must first divest ourselves of our illusions, and they simply don't want to go.We all of us, I think, desire to move into the healing light. But the cost of giving up our comforting illusory shadows is too much for most of us to bear

Anonymous said…
It is indeed costly - and I spend time with some of the people who are paying that price (all the higher because they didn't always choose to move that way in the first place ,at Wakari. For Galileo as for me, the things that some people in the Church would prefer me to say, are not words that I would want to use in some of those conversations either. Jo
2 March 2013 at 11:33

Wynston said…
"About lying, falsehood, deception, prevarications, elaboration of the truth, strategic silences ...". For a moment there I thought you were going to go on about politicians!
3 March 2013 at 07:24