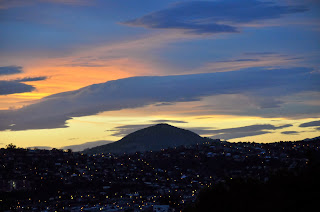 I've just got back from a meeting in Wellington where the best bit was the chance to catch up with friends. We met at the Sisters of Compassion in Island Bay and every morning I walked for an hour under a dull heavy Wellington sky through unfamiliar streets. I'm walking more and more now, as I get my body sorted for my walk through the Diocese early next year.

Over the weekend I had been in Invercargill. On Saturday, Richard Johnson and Richard Aitken had laid on a day for vestry members and I was invited to speak. We met at the Ascot Hotel, in an impressive room laid on for us by the Invercargill licensing trust, and ate a very good lunch also courtesy of the trust. I'm not sure why other towns in New Zealand don't have a licensing trust, but I guess they just don't know about the astonishing benefits it brings to Invercargill. On Sunday I preached at the patronal festival of All Saints Gladstone to a comfortably large congregation and in between events attended All Saints dinner, at which the irrepressible Frana Cardno spoke. Frana was the first woman Councillor in Southland and was mayor of Southland District for more than 20 years. 20 minutes listening to her and I could perfectly understand why any election with her in it tended to be a foregone conclusion.

And before driving to Invercargill I had spent 24 hours in retreat with our Diocesan Council. I had prepared an agenda, Alec Clark provided hospitality with his usual thoroughness and panache and John Franklin had organised worship. Eric Kyte presented some material in several sessions based loosely on the story of Mary and Martha. Things went to plan, more or less,  except that around mid-day on Friday the schedule was abandoned and we engaged in one of those big conversations  about Life, the Universe and Everything which draws people into sharing what is deepest and most important to them and which occupied us most of the afternoon. In all my years of serving on church committees, this was perhaps the best meeting I have experienced, where for once we stopped attending to the many things that distract us and instead sought the one thing necessary. Jesus was present, as of course he was all along, and we managed, in listening to each other, to listen to him.