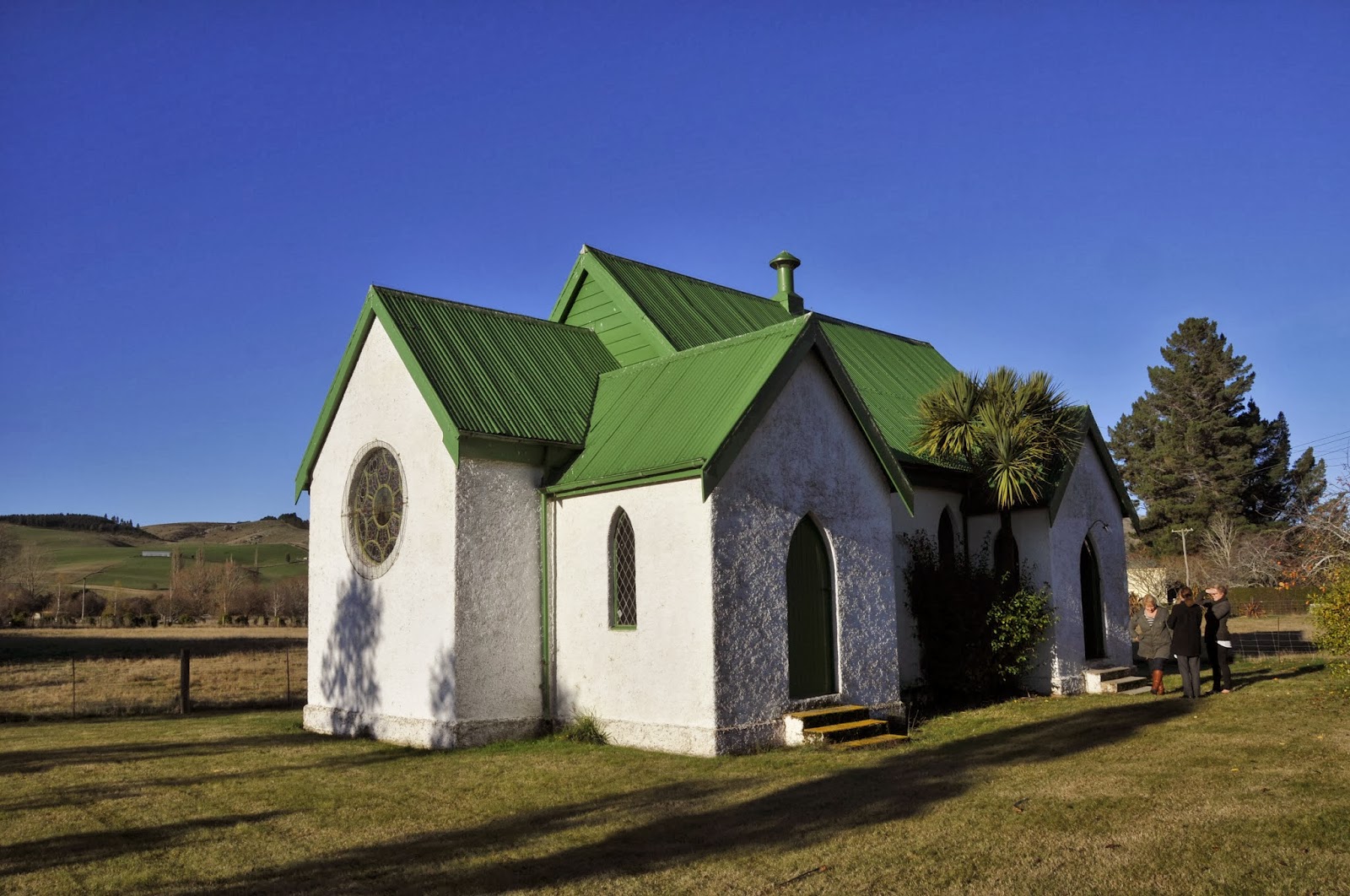 Next time, maybe? The recently deconsecrated church at Miller's Flat
Today I took my bike to Lawrence and rode the Clutha Gold Trail, a recently opened bike track which runs about 73km from Lawrence to Roxburgh, where it joins the Roxburgh Gorge Trail, which in turn links with the Central Otago Rail Trail. This is all part of a good idea by our Government to build a network of cycleways extending from one end of the country to the other; an idea whose implementation is way behind schedule, but which might nevertheless be the most positive thing for which John Key's government is remembered.

I drive the road beside the Clutha Gold Trail very frequently and had watched it being built. So today was the fulfilment of a plan formed when I first saw the guys at work putting together all those little bridges: to spend a day off doing an out and back ride from Lawrence. I planned to go to Beaumont which I thought might take an hour and a half, but I was surprised how easy it was and how quickly  the kilometres passed. The track is wide, firm and mostly flat. There are one or two small climbs and about a kilometre spent in the dark going through the old railway tunnel at Big Hill (I was pleased I had forgotten to remove my bike's headlight before leaving home). Beaumont was a little over 20 km from my starting point, so I rode up the Millennium Track towards Millers Flat for another 5 km, so that the return journey would cover 50 km, which I finished in a little under 3 hours. The scenery is magnificent and apart from a small shower of rain and a puncture just as I got back to my car, it was a beautiful, re-creational day.  I was sorry to have to turn around and I'm, wondering if, on some future Monday,  I'm game for the 100km round trip from Lawrence to Miller's Flat and back.

Although I have ridden further than this on one or two occasions over the past couple of weeks, I've always stopped somewhere for coffee; this is the longest I have gone without a break. I now know my backside will be OK for 3 hours in the saddle and I'm reasonably confident my fitness level is sufficient for the coming Hikoi. On Saturday Clemency and I walked about 23 km over the Peninsula, past Larnach's Castle and back home through MacAndrew Bay, also without a break. So, despite a few stiff joints on Sunday, I'm not too worried about my ability to do the walking.

I'm hopeful that the others in the core team will also have raised their fitness level sufficiently. There are also a thousand other preparations to be made, and Benjamin Brock Smith is working pretty much full time on those at the moment. We still need billets in Southland and Otago and there are one or two details of the route which still need finalising. There are bookings to be made and some necessary bits of kit to be acquired, most notably a camper van to act as a support vehicle. Some of the regional events are almost completely planned and others are, at the moment, more conceptual.  But it is all falling into place and with a month left to the beginning date, I am looking forward to an event which I know will have a profound effect on our Diocese and who knows? perhaps further afield.