At The Round Earth's Imagined Corners 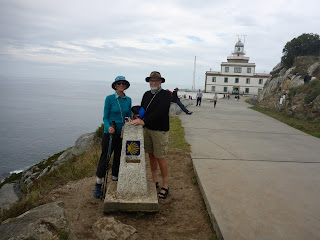 It was my call and I decided that whatever happens next we do together. None of this one of us bussing while the other one walks lark. We walked into Santiago. Embraced the apostle. Prayed before his relics. Went to a pilgrim's mass. We queued at the Pilgrims Office and got our Compostela certificates. And then made a decision about Finisterre. There was 85 km still to walk, Clemency's ankle wasn't great and the forecast was for 3 days of rain. So we hired a car.

And I use the term "car" in its broadest sense. I thought I was renting a Fiat 500 but what I got was a Smart Fortwo which is actually half a car; a whole car cut in half just behind the front seats and fitted with half an engine. It's ugly. It's noisy. It's slow. With its tiny wheelbase it handles bizarrely. There is nowhere to put anything  But it's surprisingly comfy and oddly endearing and we've put a fair few km on it. The first day we drove it to Portugal. Then A Coruna (Oh my. What a city. What a city!). And then Finisterre and Muxia.

I don't know what I was expecting at the end of the earth but it's not what I found. Finisterre is a quaint seaside town with a marina and a nice beach. It looks for all the world like the village where Doc Martin has his escapades in the TV series.  It has cafes and ice cream stalls. There are tour buses and people taking selfies everywhere. There is a 3 km walk out along a headland to the lighthouse which we managed easily. An obliging Italian snapped a picture of us at the last Camino marker. We paid (!) To have someone put  the Finisterre stamp into our credencials and we walked back.

Then we drove to Muxia. The town there isn't a tourist trap so it's one of those gritty working fishing villages which dot the coast of most countries... well not Switzerland, obviously, but you know what I mean. There is a headland to walk along here also, and at the end is a beach strewn with enormous boulders upon which the Atlantic crashes and roars. There is a large church - Nuestra Senora De La Barca ( Our Lady of the boat which is evocative for a fisherman's church) - at which a wedding was taking place. It is a powerful, majestic, brooding place which seemed a far more fitting final destination for this pilgrimage than Finisterre.

Except I suppose that the whole point of pilgrimage is that it doesn't end. That what happened for me over this past 40 days or so is a part of  a bigger process and is held within a bigger journey.  Finisterre is no more the end of the earth than any other point on the surface of this small wet ball on which we live. I travel here to learn the truths which can be seen anywhere if only I will look. And like all spiritual practices pilgrimage is a means to help me do just that.

Today we leave Spain and I doubt we will be back. I have a hankering to walk the longest and hardest Camino of them all, La Via De La Plata, which begins in Cadiz and walks 1100 km across two mountain ranges and the hot dry centre of Spain. But really, at my age, who do I think I'm kidding?

Elaine Dent said…
Yes, now that you mention it, it doesn't end. It was just God's way of waking us up to what is important in our walking on this other side of what we thought was our destination. In fact, I am finding that I need the help of others to understand what happened on the trail. Example: in my last post about "Practicing the Small Stuff," my brother Chuck's wise comment took the pilgrimage further with words that made a hugely important connection in how a practice on the trail transfers to a new practice back home! And for that matter, your comment that the pilgrimage doesn't end is helpful to me in articulating the process that I have been going through ever since reaching my "destination" on June 26. Thank you.
17 August 2015 at 22:57

Liturgy said…
Looking forward to following your online reflections, Kelvin, having been following you and praying for you as you walked. I, too, began blogging about my walking the Camino after I returned home. You, and your readers, might be interested in my reflection today: http://liturgy.co.nz/ultreia-et-suseia