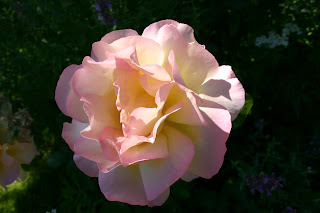 On Wednesdays we have a Eucharist in the office. Anybody who wants to come is welcome to join us, but mostly it is just Ginny, Debbie, Alec and me. Today I was a minute or two early. I sat at the low round table,where the wine and the bread had been placed amongst the pamphlets and educational brochures, and flicked idly through the prayer book I had taken at random from the box. I realised that this was one of my own - or to be honest, one of Clemency's - that had somehow got mixed into the office stock. It looked like it had hardly ever been used, but tucked into the funeral service was a little sheaf of papers: my notes from a funeral I had conducted in Hamilton in 1994.

22 years ago a baby had died. She was only 18 days old. There was an outline of the eulogy I delivered, and the name of the hymn we sang. There was a sheet taken from a letter pad on which I had made notes during my conversation with her family. And there was another sheet, written in an unfamiliar woman's hand:  some notes the young mother had carefully, agonisingly, tearfully prepared for me before she met with me. It spelled out how the little girl had been diagnosed with a heart abnormality just two weeks before her birth. It expressed a mother's deep gratitude for the kindness and skill of the staff at Waikato Public Hospital and at Starship Children's Hospital. It spoke of how much she had learned and what joy she had gained from her daughter's tiny life.

I looked at the names of baby, and father, and mother. After 22 years I could not remember their faces but today they were all very real to me. I wondered why I, newly appointed as Ministry Educator in the Waikato Diocese, had been asked to take this funeral. I thought about what had happened to this family in the decades since. I suppose, at the time, I maintained a certain distance because it had been my job to be a non anxious presence, and to carry this couple and their friends and relatives through a harrowing transition, and that distancing has contributed to my loss of recall. But they will not have forgotten me. In this horrible and profound time I was admitted into the heart of their family and was trusted to walk with them through this grief which must have shaped and changed them forever. I hope I was of use to them.

I looked at those little pieces of paper and the tears came, finally, after all these years. This is the part of my vocation - this raw and real dealing with people in the most formative and powerful moments of their lives - which I cherish the most. The synods, and committees, and the endless conferences with their sheets of coloured A4, and the budgets, and reports, and the pointless arguments about the minutiae of doctrine or liturgy, I would happily give away tomorrow; but this participation in humanity and in spirit is what I am called to, and this is what I hope to do until I die.

So, Stacey Marie, darling girl. Today I remembered you, as did one or two of the people I worked with. I gave thanks for your brief sojourn amongst us, and for the joy you brought. I prayed for you and for your Mum and Dad, who no doubt grieve you still.

Trish Ducker Winton said…
Thank you for sharing the human side of our ministry - the tears, the pain but also the privilege of sharing daily these highs and lows with others.
5 May 2016 at 05:06

Barbara Harris said…
So beautiful, Kelvin, your meditation on the tiny life of Baby Stacey.
And for our comfort those lovely words of the hymn of Dr Colin Gibson, verse 3,
" Nothing is lost on the heart of God,
Nothing is lost forever "
7 May 2016 at 13:01