God, Sexuality and the Self 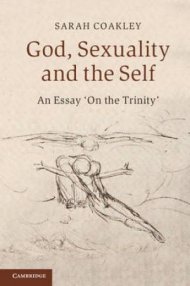 The Rev'd Professor Sarah Coakley's first volume of  her projected four volume systematic theology is not overly huge, at 388 pages, but it took me a while to read. Professor Coakley's style is accessible, and she uses an intriguingly eclectic range of sources to make her case, but I couldn't rush it: she faced me with such new and such big ideas in every chapter. Recognising that the idea of a systematic theology is itself problematic, particularly to many feminists, in that it seeks to impose reductionist, prescribed system on our conception of the divine, she has set out to construct a Theologie Totale, a drawing together of a number of sources to recast theology not so much within the strictures of rationality but within the surrender which is the basis of her own contemplative practice. She is academically and Biblically rigorous, but manages to talk to a wider audience than the academy.

The book is an extended essay on the Trinity, which she explores from a number of perspectives. She begins with Paul, moves through various patristic sources and follows with an intriguing examination of the way the Trinity is portrayed in Christian art. Her investigation of the Trinity includes sociological fieldwork in a contemporary Pentecostal church.

Evagrius Ponticus wrote, "If you are a theologian, you pray truly; if you pray truly, you are a theologian." and this is the basis of Sarah Coakley's Trinitarianism. In Romans 8 she identifies a surrender to the Spirit which, in the early church, was practiced in either  "charismatic" or "contemplative" forms of worship. Either of these involved a forsaking of self which, as it became more ordered, the church found uncontrollable and therefore profoundly threatening. She sees in the Trinitarian debates of the early church an attempt to frame the Trinity rationally, and therefore safely. The nature of reality (and I am paraphrasing and simplifying Sarah Coakley here) is Trinitarian. There is God, the ground of all things. There is the expression of God. There is the relationship between God and the expression of God. These three are one and they are three. It is impossible to have one and not simultaneously have the other two in all fullness. The relationship between God the Father, so named, and God the son is one of desire and love. These passions characterise the creation which arises from the Triune God so that the desire and love present in human relationships is a participation in and a sign of the desire and love which exist in the originating relationship which is God.

Sarah Coakley builds a convincing case that  all expressions of the Trinity have been informed by the political and social preconceptions of those who framed them, but in the end she arrives at a surprisingly conventional Trinitarian theology. She provides a broad, and for me helpful perspective on the gender and sexuality debates which threaten to divide the church. Most importantly she gave me a fresh understanding of God the Holy Trinity and a means to earth my new understanding in my contemplative practice. I am eagerly awaiting volume 2 of her Theologie Totale, due sometime this year.

Father Ron said…
And, at this present time, certain N.Z. theologians are still worrying about the supposed 'subordination of Christ' on blogs. This might explain their inability to see the bigger picture - of the complementarity of the 3 Persons of the Triune God. That "God is Love", therefore, seems to totally escape their terms of reference.
13 June 2016 at 09:46