Naming (The continuing journey to Patmos) 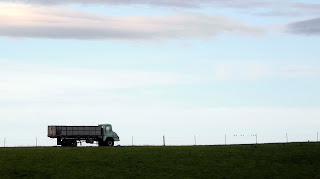 I dislike the practice of giving photographs twee names. Hate it with a passion, actually. But I did name this photo, "Truck with Birds", because I wanted to draw attention to the bit of the picture which would, otherwise, so easily be overlooked.

I'm now reading my way through the last volume of the Old Testament, which in the Bibliotheca version, is The Writings. So it's been psalm after psalm the last few days. I'm grateful that when he was editing this lovely Bible, Adam Lewis Greene used the Jewish tradition of of not trying to translate or render the name of God, but instead to use the meaningless and unpronounceable YHWH. It's a reminder of the deep wisdom of the first commandment, that God is unknowable, and whatever image -whether physical or intellectual or  imaginary - we create to represent God is not God, but rather, something less of our own devising. Our images of God come freighted with our own unconscious associations, and what we think of as God is, more often than not, some mere demiurge: a supernatural being of immense (but not infinite) power who is bound by all the things we are bound by. Our little mental gods are subject to space and time and gravity. We argue about God's "will" and "purposes" and beginnings and even (oh the ridiculousness!) gender.

I know this. Or I think I do. So what happens inside my head when I come across YHWH in the text?  Well, I just can't help myself, I'm human after all, so I've got to think something. I can follow ancient tradition and mentally say "The Lord" but that has all manner of unfortunate and limiting connotations. I can fill in what I imagine might be the missing vowels and say "Yahweh" but then I'm back to a name, and back to whoever owns that name and producing my own picture of a big guy in the sky. Mine is, of course, a very theologically sophisticated and advanced picture, - by which I mean one I would have considered heretical a decade ago and one I will consider  naively crude  in a decade's time - but it's still just a picture; my own creation.

So when I encounter the unpronounceable name I've been inwardly substituting the word "Reality". I think this term has good antecedents: after all the divine name was revealed to Moses as אֶהְיֶה אֲשֶׁר אֶהְיֶה , or, as best we can guess, I Am What I Am, or I Am What Is, or just I Am. The stream of tradition in which I currently swim is fond of calling God The Ground of Being, or sometimes, just Being, which is of course just another culturally circumscribed metaphor, but it does point to Jesus' central teaching, namely that  The Kingdom is around us, everywhere as close as breathing, and the thing that keeps us from this reality is the limited nature of our own understanding.

So I read the best known of all the psalms and think Reality is my shepherd, I shall not want, and my view  both of God and  of reality shifts. No more am I thinking of some being in the sky watching over me but of a universe of which I am part and which is shaping and forming me for ends which become increasingly clear as I co-operate in my shaping. No more am I thinking of cold, inert matter, but of a process which is purposeful and loving, which takes form in the fabric of the Universe but which is even bigger than the fabric of the universe. I am reminded of how distanced I am from reality, no time more than when I imagine I am not.

Elaine Dent said…
Now, you've got me thinking! What name/word for God could I say that would convey the mystery beyond knowing? Actually YHWH might work---but only the way Richard Rohr does it in an evening talk at Norwich Cathedral in 2015, "Becoming Stillness" found on youtube. Towards the end of the hour long message introducing contemplative practice, he teaches the congregation how to use YHWH as a centering breath, more than a pronounced word or name. Thanks for this post that makes me start thinking about naming God in a way that rises above and beyond the gender wars.
21 June 2017 at 22:23

Alden Smith said…
The word I substitute for GOD or YHWH is LOVE. If I remember correctly the New Testament talks about God as Love - 1John 4:7-8.

'To love is to know God precisely because God is love'. As Peter Rollins in his important book - How (Not) To Speak Of God - states:

Kelvin Wright said…
There is a Talmudic tradition which says that the unpronounceable name represents the breath: the 4 silent Hebrew letters are an onomatapaeic rendering of the incoming and outgoing breath: so the name of God is present on the lips of all people at all times, waking or sleeping. It is the first and last thing that passes our lips. I will listen to Rohr's talk, as I like the sound of his use of the breath in this way.

Yes, Alden, Love would be a valid mental placeholder for YHWH. In Centering prayer, the first thing to do when deciding to follow the practice is to choose a holy word: one or two syllables which are repeated not so much as a mantra but as a symbol of what I am doing when I sit down. And that is mine
22 June 2017 at 15:18