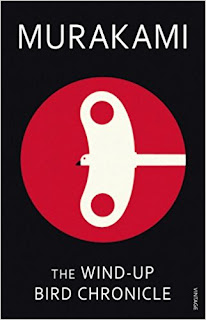 To thank me for  for preaching at her installation as Dean of Christchurch, Lynda Patterson gave me a copy of Haruki Murakami's  2010 novel 1Q84, one of the best works of fiction I've ever read. It was like nothing I had ever encountered in its smooth blending of surreal elements, its inventive scope and its array of quirky but believable characters. Yesterday I finished another of Murakami's books, The Wind-Up Bird Chronicle, and found it equally challenging and satisfying.

At a little over 600 pages it was written in 1994-5 and translated from into English in 1997 by Jay Rubin. Murukami's influences are, partially at least, Western, and although the "feel" of the book seems decidedly Japanese to me, he is sometimes criticised in his homeland as being un-Japanese. This is in some measure because the works of most of his compatriots place strong emphasis on family and connection while his books are filled with solitary people, and loneliness is one of his key themes. His influences show in the many and wide ranging and sophisticated references to music and literature, which he has a delightfully witty propensity to scatter through the text: for instance in a book which hinges on the tension between aloneness and no man is an island, two women are named after islands

The Wind-Up Bird Chronicle is narrated, like most of Murakami's novels, in the first person, in this case, by a young man in his early thirties living an unexceptional and dull life. He lives in a small house in a pleasant suburb of Tokyo with a beautiful though self contained and increasingly distant wife. When the couple's cat goes missing Toru Okada, the narrator begins a search which leads him into contact with a range of distinctive characters whose disparate lives  are surprisingly linked with each other and with his. These characters each has a story to tell, and thus the action moves back and forth in time and space from the Japanese invasion of Manchuria to Hokkaido to  modern Tokyo. The action shifts also, between the "real" world and another, alternative reality which presents itself in dreams and altered states of consciousness and which some characters seem able to move into and back at will.

The writing is cultured and clever and beautifully paced, and the reader is led into gently into an intriguing and compelling narrative, but the subject matter of the book is anything but light. It deals with the nature of evil, both personal and social. It deals with depravity and the way innocent people are corrupted. it deals with the way debauched people can find a congenial place within social and political systems and do very great evil. In places there are descriptions of cruelty and of sexual encounters which are graphically but not gratuitously related. Be warned. In the end  though, despite the excruciating aloneness of nearly everyone encountered in the book, it is about the way we are all connected, and about the transforming power of courage and love.

Spirituality is a theme of the book, though of course it is Taoist or perhaps Zen spirituality which is the undergirding. Two of the characters separately  find spiritual enlightenment at the bottom of deep wells, a graphic metaphor of the descent into the depths of the self found in many religious tradition. Toru achieves a kind of shamanic state,  finding at the bottom of his well a way of entering the book's alternative reality and bringing the novel's many scattered threads into a powerful reconciliation.

I finished the book on Friday, moved and challenged powerfully in a way I rarely am by fiction. It's taken me a few days of thinking to get  the plot sorted in my head, and Murakami's wisdom and insight into the human condition will stay with me for longer than that. So thank you Lynda. A sermon in return for an introduction to this profound writer. I know who got the best of that deal.