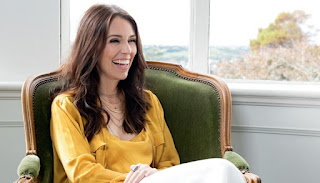 The more astute among you may have been able to read between the lines of my moderate and well balanced Facebook posts and detect a few subtle signs that, when it comes to politics, on occasion I may lean slightly to the left. So you won't be surprised that I was pleased with the way things turned out yesterday. We have a new prime minister, one from the same generation as my children.

I'm hopeful about how things might work out for her and her new government, but I'm not kidding myself it will be easy. She inherits a national debt whose servicing alone is costing us around $4.5 billion a year (that's about a thousand down the tubes for each man, woman and child of us a year), and people who know about these things are saying it's about to take a turn for the worse. The ecological and social problems which were intractable for the outgoing government are still there, and she has a number of promises, made on the campaign trail, which many people are holding their breath to see delivered. The climate change chickens seem to be coming home to roost a lot sooner than any of us expected. Then she has to hold together a government composed of three different parties and including the most wily and inscrutable politician we've ever had. A 37 year old who has never been in government, has at her back a 73 year old with 42 years of parliamentary experience which includes stints as cabinet minister, acting prime minister, party leader, plotter, schemer and deal maker extraordinaire. She's such a nice person. How can she do it? It'll take a miracle.

But then again, that's what people said about the Labour Party's  chances of forming a government only six months ago. In the last six months she has led the revival of their fortunes which resulted in yesterday. And while all the attention has been on Winston Peters over the last 12 days, there have of course been other players as well. Both Jacinda Ardern and Bill English were working to emulate the astonishing political feat pulled off by John Key in 2008 of forging a credible coalition government out of disparate elements. Jacinda Ardern managed to do it with three parties, and Bill English did not, with two.

So, there's a three fold task, each part of which seems almost impossible: 1) Build the Labour Party from it's base of 24% in the polls and make it a credible governing party in six months flat. 2) Negotiate a viable coalition government. 3) Hold it all together.  It's 2 out of 3 so far. The relentless positivity and the easy rapport with pretty much everyone she meets hides more steel than most people would guess at. History's pages are littered with those who fell by underestimating a capable woman.

In New Zealand we tend to elect Labour governments to make changes and National governments to manage them. There's change a foot, as the vast social experiment , that of the Reagan era "new right" economics entered into by David Lange's Labour government is rolled back and put into the well- that-one-didn't-work-very-well-now-did-it? cupboard. I'm confident that in Jacinda Ardern we have a leader who has a pretty good shot at leading us into whatever comes next.