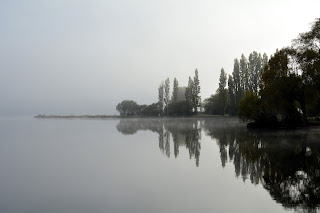 My brother Alistair says, whether originally or not, who cares? that retirement is like being a teenager again, only this time around we have money and couldn't give a stuff what other people think of us. He told me this when he was here a few weeks ago, riding South on his large motorbike, in company with Sue on her even larger one, and when they had stopped at our place to sit around and talk about the meaning of Life, the Universe and Everything. He's right, of course. It's been a year since I retired and there's no doubt about it: hands down, by a country mile, this has been the best year of my life.

***
Adolescence is a transition. It's the period of no longer and not yet, that space between the dependency of childhood and the responsibilities of adulthood. It's the time to experiment with ways of being ourselves and to imagine futures. So here, at the end of responsibility, when there is not much future left to imagine, is another transition, that great one lived out on the threshold of the most unknowable of unknowns.

***
It's 2018, so there's another significant anniversary. Exactly 20 years ago I was busy negotiating with St. John's parish, Roslyn, about the possibility of moving South, from Hamilton to Dunedin, so that I could live in the lovely old vicarage on Highgate. Although so much has happened in these last couple of decades, it doesn't seem that long ago that we all made that transition. There was the trip down State Highway 1, and across on the Ferry: Clemency in her tiny red Suzuki and me lumbering along behind her in the Commodore. Then the kids racing through the upper floor of the house bagsing bedrooms. 20 years in retrospect is such a brief time, but I prospect forward and know that in another 20 years time, in 2038, I will be gone. I'm well enough. The stuff the nurse injects into me every 3 months seems to be working just fine and dandy, but let's be realistic here.

***
Nick and Charms are here from Sydney with their 2 little girls. Tomorrow we'll drive, with Catherine, up to stay with Brids and Scott and their 3 children and this will be the first time ever that the twelve of us have been together. It'll only be for a few days, but this is the stuff memories are made of; for me and for those of us whose transitions all lie ahead.

***
Somehow it has become increasingly easier, during the course of this year, to tell the difference between what is significant and what is not.

***
I came across this clip in Aeon magazine a couple of days ago. It makes me want to go to Denmark. I think this guy and I would find a fair bit to talk about. My first adolescence was to prepare me for life. My second is to prepare me for death. I have a sense that I'm doing a darned site better this time around.

Anonymous said…
Also a time of realisation that while your family still mean everything to you, you mean less to them now as their own partners and children absorb their lives. A source of comfort that this is all happpening, as when it is time to part this world, they will be sad but not devastated and can dwell on the happy memories of your interaction in the senager years.
21 April 2018 at 18:05

Kelvin Wright said…
I'm not sure how to respond to this as I suspect that behind this brief paragraph is a deep grief.

All relationships end. Every single one of them. So one day the relationship with my children and grandchildren will be over - an occasion for grief for them maybe but for me? I simply don't know. I guess part of the task of the end of life is letting go of our families and helping them let go of us. But really, on both sides we have been doing that for years so the although our family relationship is strong they are not the centre of my life. Nor I of theirs.
22 April 2018 at 18:24

Merv said…
A deep grief? Perhaps. But also a deep wisdom.
I often wondered at my reaction when my own father died. But there it is - "sad but not devastated".
Shalom
9 May 2018 at 15:41