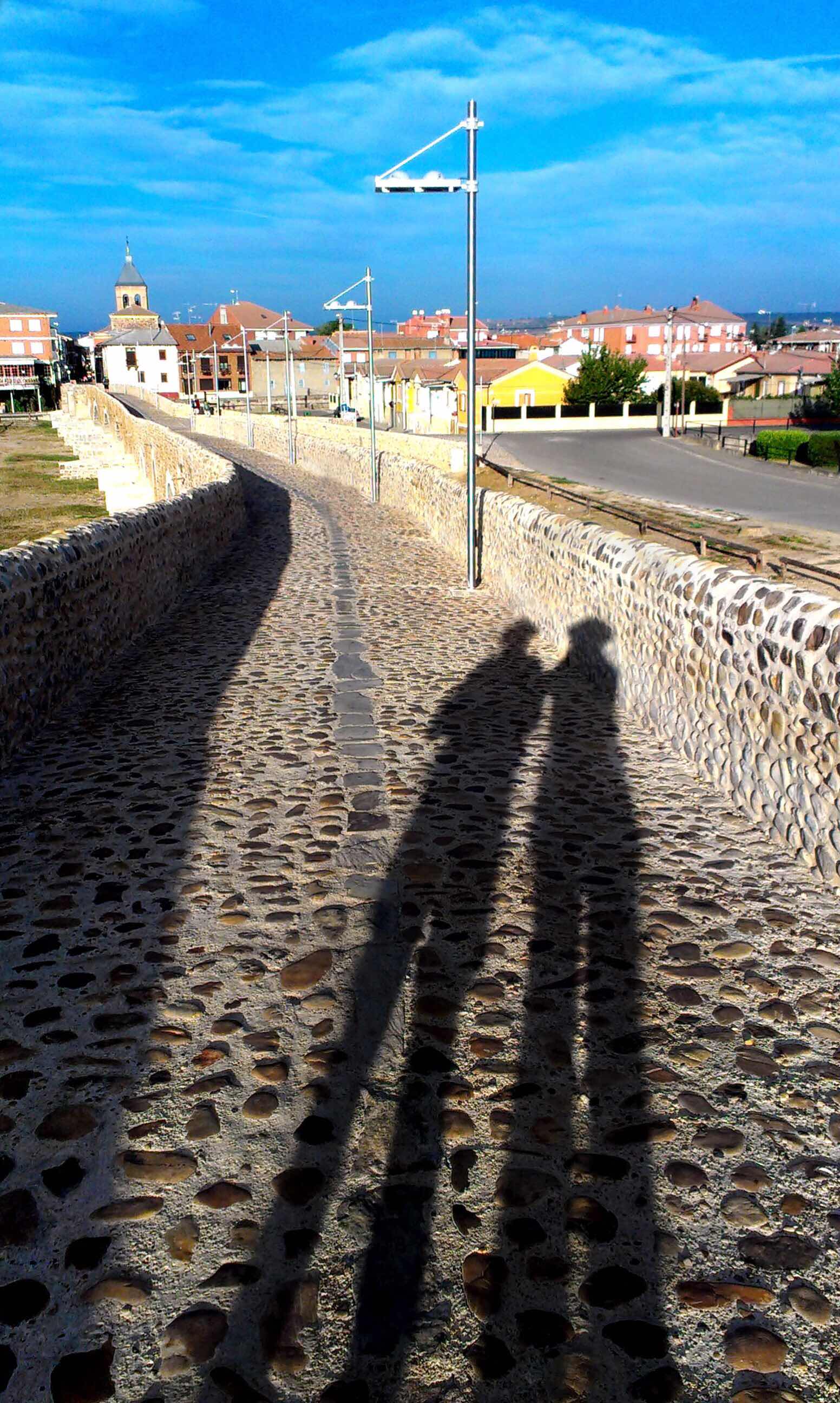 Clemency and me on the medieval bridge at Hospital de Orbigo, on the Camino Frances.

I’m trying to find my earliest memory of her. I think I have it. It’s 1968, so I am 15 and she is only a few weeks old. The shop is busy, so I’m left, literally, holding the baby, not that I mind or anything. Far from it. Very far from it. I proceed as Mum has shown me. I measure out the formula and mix it and place the bottle in a bowl of boiled water to heat. I test the temperature of the milk by splashing a few drops on the inside of my forearm, then hold her in the crook of my left arm with the bottle in my right. I put the teat between her lips and watch how her suckling makes her tiny cheeks move. She opens her eyes and looks vaguely around, the way new babies do, then her eyes catch mine and she looks up at me. Her eyes are so blue. In all my life I have never seen anything quite so beautiful. She coughs and gasps on the milk, so I stand, and lift her onto my shoulder, and pat her back. Good grief! How can someone so little belch so loudly? There’s a little white patch of puke on my shoulder, but I’m in no hurry to clean it off; it’s an honour badge of sorts. I rock her back and forth and tell her how lovely she is and how good. She is sleeping now, so I wrap her blanket around her and lay her in her cot, just the way Mum has shown me, and tip toe from the room.
****
I hold my own son, minutes after his birth. I look into his eyes, and to my utter astonishment, he looks back.
****
My two year old grand daughter has a little soulmate. He’s pretty much exactly her age, and when the two of them meet they, literally, dance with joy. They have their little routines when they encounter one another, daily: climb these steps;  drag these buckets all the way across the netball court to here; pat the mural and converse, incomprehensibly, about its contents; drink from the fountain; climb these other steps. There are many other children, but they have eyes only for each other.
****
Why is it that we connect, one with the other? There is no sense to this, no logic at all. Some people we meet and interact with, but with some others there is something more profound. There is encounter. When we encounter another, somehow that subjective sense we have of our own self meets their subjectivity and there is a knowing which is hard to verbalise. When we encounter another there is perception of who they are which extends beyond the trivial details of what they look like or what they do. Of course this deep knowing develops most powerfully with those we are physically intimate with, but not always. It happens between friends, but also sometimes between people who scarcely know each other. It is common between twins, but also between fraternal siblings, and other family members. Sometimes we can encounter other conscious things. With dogs, and horses particularly, but with other species too, there is sometimes a meeting of eyes where we know and we know we are known. Having shared experience encourages encounter, as does having similar patterns of thought, but perhaps the greatest determinant of whether you will encounter someone, or, merely meet them is the extent to which you are defended against them. You can’t encounter someone you are lying to, or frightened of, or who is frightened of you. You can’t encounter someone if you are holding yourself in reserve or if you  need something from them.
****
Fifty years have passed. Fifty! She tells us what the restaurant is famous for, and orders for us all. I have seen her only once in the last 47 years, at my mother’s 90th birthday in 2016, but here we are, in her city. What do you say? A half century has passed since then and life has been kind to both of us, and there is nothing  either of us needs from the other. But I look at her and know she is one of us. She looks like her mother, certainly, but also like one of her half brothers. And she looks and thinks and speaks and acts so like my sister that it’s like having a younger version of Val at the table. The conversation comes easily and kindly. Perhaps it is the deep, unconscious memory of nurture given and received. Perhaps it is the similarity of views. Perhaps it is respect for and pleasure at all she has become. We leave the table and walk into the wet, windy city . I’m not sure when, or even if I’ll be back, but somehow that doesn’t matter.

Kathryn said…
So beautiful to have such a wonderful connection with someone that has lasted all those years and is still 'alive'.
It's like the lasting friendships that exist sometimes where you haven't seen someone for years and the conversation flows as if you just saw them the day before.
So special. To be treasured.
29 August 2018 at 23:14