That was quite some week. 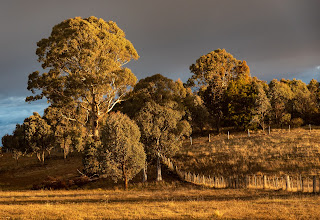 Photographers call the periods just before sunset and just after sunrise "the golden hour" because of the colour of light and because its strong directional nature makes for some great shots - sometimes at least. This is the golden hour in the countryside just outside Canberra in Australian Capital Territory.

I've been away, and here is a diary of the last week.

Friday 31 May. Flew to Australia via Auckland. Flights around New Zealand were delayed because of bad weather, so our flights were all late. got to Melbourne about 9.30 pm, picked up our rental car and found our way to a small but perfectly formed AirB&B on the 14th floor of a building in the docklands area.

Saturday 1 June. Breakfast at a wonderful cafe in Footscray, then went to some favourite places in Melbourne - St. Kilda and Prahran, before driving into the city. We had seats for the two parts of Harry Potter and the Cursed Child at the Princess Theatre. First show 2.30 pm, second 7.30 pm. About 5 hours of theatre all told. It was stunning. Between shows we met up with Kate, Roger and Cordelia Prowd for dinner in an excellent restaurant.

Sunday 2 June. Drove to Canberra via the coastal route, through Lakes Entrance and the Snowy Mountains. Gorgeous countryside. Rivers. Beaches. 2-300km of forest. Really great lunch at an odd wee cafe in the middle of nowhere, and made it to Canberra about 6 pm after 11 hours of driving. Found our AirB&B and had an early night.

Monday 3 June. Went to Rachum, my sister in law's retreat centre about 50 km from the city. Spent the day sweeping and exploring the place, and had a picnic lunch in the covered visitor's space. Dinner in Canberra with Alison's 3 daughters and their partners.

Tuesday 4 June. Drove to Melbourne via the Hume Highway. Arrived at Clemency's cousin's house in Carlton North around 4, after a 7 hour drive. I dropped the rental car in to Central Melbourne and met Kate Prowd for dinner. Kate was, late last year, consecrated as assistant bishop in charge of the Oodthenong region of the diocese of Melbourne and she had asked me to present at her first clergy conference. She drove me south to Point Lonsdale where I was staying.

Wednesday 5 - Thursday 6 June. I spoke to the clergy of the Oodthenong region. There were about 65 present, representing churches in Geelong and the rapidly developing Western and Northern parts of Melbourne. I've been to many clergy conferences and this was one of the good ones. The other presenter, Dorothy Lee, a lecturer in New Testament at Trinity College, was superb, and I managed my bits without falling over. Kate herself was magnificent. She's a very different person from Jacinda Ardern, but when I watched her give her inaugural Bishop's address I thought often of our PM, in that Kate was pioneering and modelling an entirely new way of being a leader. She's physically small, and displayed at times a touching vulnerability, but her intelligence, strength purpose and integrity were obvious and her people responded with quiet enthusiasm. They are in good hands and they know it.

Friday 7 June. Conference ended. Long talk with Kate over lunch about a developing crisis in my wider whanau. Drove back to Cathie's - 2 hours to cover 50km, with the last 10km taking half of that. At dinner, Cathie's daughter Esther, a Rabbinic student, led us in Welcoming the Shabbat.

Saturday 8 June. Taxi arrived at 6 am for the airport. Flew home. Dunedin freezing cold. Lit a fire. Went to bed and slept well.