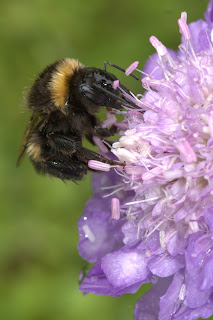 Sometime back in 2018 I set myself the task of photographing a bumblebee in flight. I did this not because I especially liked bumblebees - though I didn't mind them - but because it seemed difficult. They were small and moved fast, and the process of getting a photo would improve my camera handling skills. And besides, we had plenty of them in the garden so I would be able to get in lots of practice. 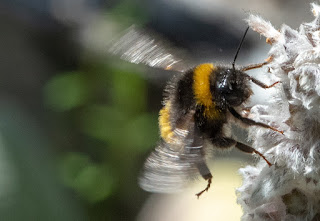 So I sat by the plants that seemed to attract them. I took hundred of pictures, mostly of blurry striped blobs or of recently vacated flowers. I watched. I learned - about the camera, the lens, certainly, but also quite a lot about the bees. And quite a lot about myself, which I guess was the point of the exercise all along. 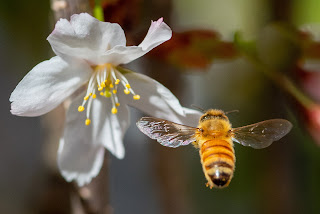 There were honeybees in the garden as well as bumblebees, so naturally I took a few snaps of them as well, but I didn't find them nearly such a challenge. 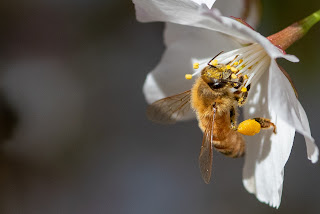 They have clearly defined little bodies and they have a tendency to hover obligingly while the shot is taken, so although they are quite a bit smaller I found them easier to photograph, so I didn't bother with them. 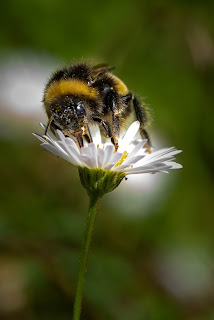 After a while the proportions of those pictures I threw away and those I kept began to shift towards the keepers end of the spectrum. 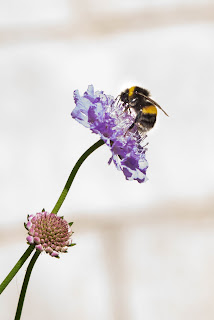 I began to look not just for clearish pictures of bees, but also for compositions I liked. And I became increasingly enamoured of these furry little creatures with their bright yellow stripes and their shiny black heads. The camera stopped  the incessant processes of their little lives and let let me see their elegance and strength. 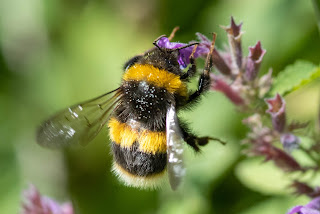 I saw things through the lens I could never have seen with the naked eye. For instance, some of them were covered in mites. These, I learned, were not actually parasites. Bumblebees, it seems, have little interest in housework.  The mites live in the bumblebees' little, tumble down hives and do the bees a service by cleaning up the detritus left lying around. Then, every so often they attach themselves to a bee who transports them to a flower where they hop off and wait for another bee to take them to another hive and thus further the causes of mitedom. They only cause issues for the bees if so many climb aboard that the bee can't fly, but that rarely happens. 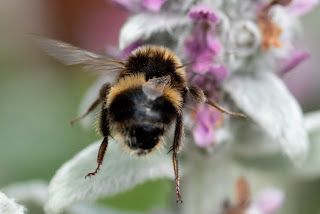 But I saw that that mites aren't their only issue. Looking at the pictures greatly magnified from life sized I was often amazed at the decrepit condition of their wings. Sometimes they would have about half of the wing surface gone, and sometimes, as here, one or more of their four tiny wings was completely malfunctioning. But they still worked on, sometimes walking from flower to flower instead of flying, but still doing their bit for the hive. 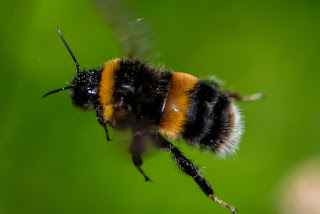 I got there in the end. I managed a few shots that fulfilled my original objective but were reassuringly lacking in perfection, meaning I have no inclination to cease the quest. 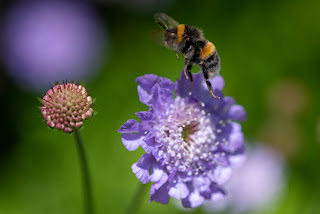 Because watching bumblebees has taught me to love and admire them 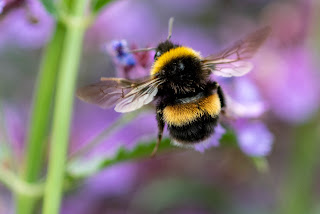 We would get precious few flowers and vegetables in our garden without them, for one thing. But the more I saw them the more I could see that they were not just  pre-programmed little automata. They made decisions and judgements. They looked out for each other and communicated with each other. I couldn't watch them and not reevaluate what it meant to be sentient: to be alive, and conscious and rational. 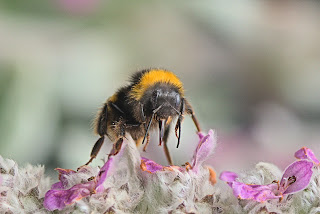 This shot was taken only a couple of days ago. I now know the plants they enjoy visiting, and when they like to go there. I can see from their differences in colour and size that there are several little hives near our garden, probably four. I'll continue to watch, and who knows? one day I might get a really good shot?