The Comfort of the Resurrection 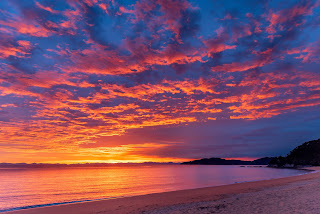 When a photo appears capture it. Don't think you will come back later and get it, because it will be gone and that particular pattern of cloud and sea and rocks and sand will never be repeated. And don't think that something as limited and primitive as a camera is going to reveal  the coldness of the damp sand beneath your bare feet; or the sound of the oystercatchers warning each other that you might want to make an omelette out of their eggs; or the liminal stillness of the morning air before the wind rises. And that redness in the sky and the breadth of it - don't delude yourself that you are going to show that to anyone. All you can ever do is suggest.
****
Heraclitus was a philosopher who lived about 500 BC in Greece. He thought that the universe was not so much a thing as a process. We, and all the stuff we see about us are in a state of becoming. Nothing is constant and the apparent solidity of things is an illusion caused by the comparative slowness of some changes. I think he was right. No, let me rephrase that. With every ounce of my being I KNOW that he was right.
****
If everything is a great flux, and if there is nothing solid because it's all a huge never ending process, where then shall we find truth? It's a pretty good question. I'm not sure Heraclitus ever managed to answer it. But at least he gave others the possibility of finding an answer.
****
One of Heraclitus' favourite words was ὁ λόγος  (ho Logos), The Word. By this he meant not so much a static definition, but (surprise, surprise!) a process: an unfolding of meaning which reveals itself over time. The writer of the Fourth Gospel borrowed this idea from Heraclitus. The Fourth Gospel opens with these words: Ἐν ἀρχῇ ἦν ὁ λόγος, καὶ ὁ λόγος ἦν πρὸς τὸν θεόν, καὶ θεὸς ἦν ὁ λόγος In the beginning was The Word and  Word was with God and The Word was God. So in a sense, the Gospel is an answer to Heraclitus' question about where we find truth in the great dynamic process of creation.
****
My favourite poet is Gerard Manly Hopkins. And all that is above is a kind of introduction to this poem that follows. Like me, Hopkins one day saw an overwhelmingly beautiful pattern in the clouds: a pattern that was impermanent as cloud patterns must be, and which spoke to him of the impermanence of everything, including people. And that impermanence presented Hopkins with the question of where, if anywhere he might find truth. He says it is in the resurrection: in that diamond solid experience which Christ came to share with him. Hopkins didn't have his camera with him to try and capture that ever changing moment; he had to use words instead. He's done a better job than me, so I'll give him the last
Word.

by Gerard Manley Hopkins
Cloud-puffball, torn tufts, tossed pillows | flaunt forth, then chevy on an air-
Built thoroughfare: heaven-roysterers, in gay-gangs | they throng; they glitter in marches.
Down roughcast, down dazzling whitewash, | wherever an elm arches,
Shivelights and shadowtackle ín long | lashes lace, lance, and pair.
Delightfully the bright wind boisterous | ropes, wrestles, beats earth bare
Of yestertempest's creases; | in pool and rut peel parches
Squandering ooze to squeezed | dough, crust, dust; stanches, starches
Squadroned masks and manmarks | treadmire toil there
Footfretted in it. Million-fuelèd, | nature's bonfire burns on.
But quench her bonniest, dearest | to her, her clearest-selvèd spark
Man, how fast his firedint, | his mark on mind, is gone!
Both are in an unfathomable, all is in an enormous dark
Drowned. O pity and indig | nation! Manshape, that shone
Sheer off, disseveral, a star, | death blots black out; nor mark
Is any of him at all so stark
But vastness blurs and time | beats level. Enough! the Resurrection,
A heart's-clarion! Away grief's gasping, | joyless days, dejection.
Across my foundering deck shone
A beacon, an eternal beam. | Flesh fade, and mortal trash
Fall to the residuary worm; | world's wildfire, leave but ash:
In a flash, at a trumpet crash,
I am all at once what Christ is, | since he was what I am, and
This Jack, joke, poor potsherd, | patch, matchwood, immortal diamond,
Is immortal diamond.